It was named after Mount Potala, the abode of Chenresig or Avalokitesvara. The Potala Palace was the chief residence of the Dalai Lama until the 14th Dalai Lama fled to Dharamsala, India, after an invasion and failed uprising in 1959. Today the Potala Palace has been converted into a museum by the Chinese government.

The building measures 400 metres east-west and 350 metres north-south, with sloping stone walls averaging 3 m. thick, and 5 m. (more than 16 ft) thick at the base, and with copper poured into the foundations to help proof it against earthquakes. Thirteen stories of buildings – containing over 1,000 rooms, 10,000 shrines and about 200,000 statues – soar 117 metres (384 ft) on top of Marpo Ri, the "Red Hill", rising more than 300 m (about 1,000 ft) in total above the valley floor. Before the first skyscrapers were built, the Potala Palace was the world's tallest building.

The Potala Palace (Tibetan: Po-trang Po-ta-la; Chinese: Bùdála Gong) in Lhasa was the primary residence of the Dalai Lama until 1959, when the 14th Dalai Lama fled to Dharamsala after a failed uprising.

Today the Potala Palace is a state museum, a popular tourist attraction, and a UNESCO World Heritage Site. It was also recently named one of the "New Seven Wonders of the World" by the television show Good Morning America and the newspaper USA Today.

This ancient architectural complex is considered a model of Tibetan architecture. Located on the Red Hill in Lhasa, Tibet, it is 3,700 meters above sea level and covers an area of over 360,000 square meters, measuring 360 meters from east to west and 270 meters from south to north. The palace has 13 stories, and is 117 meters high.

In 641, Songtsan Gambo, ruler of the Tubo Kingdom, had the Potala Palace built for Princess Wencheng of the Tang Dynasty, whom he was soon to marry. This structure was later burned to the ground during a war and was rebuilt in the 17th century by the Fifth Dalai Lama. Repeated repairs and expansions until 1645 finally brought the palace to its present scale. Over the past three centuries, the palace gradually became a place where the Dalai Lama lived and worked and a place for keeping the remains of successive Dalai Lama. 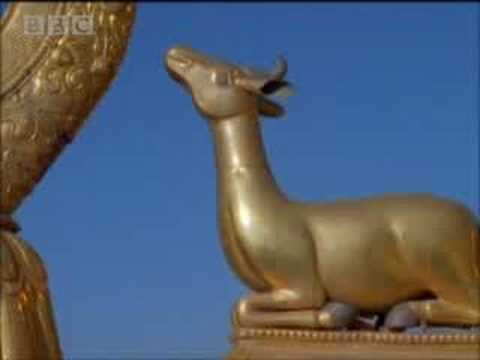 View other events that happened in 637