Hagia Sophia is a former Orthodox patriarchal basilica, later a mosque and now a museum in Istanbul, Turkey.

Famous in particular for its massive dome, it is considered the epitome of Byzantine architecture and is said to have "changed the history of architecture." It was the largest cathedral in the world for nearly a thousand years, until Seville Cathedral was completed in 1520. The current building was originally constructed as a church between 532 and 537 on the orders of the Byzantine Emperor Justinian and was the third Church of the Holy Wisdom to occupy the site, the previous two having both been destroyed by rioters. It was designed by Isidore of Miletus, a physicist, and Anthemius of Tralles, a mathematician.

The Church of the Holy Wisdom, known as Hagia Sophia (Άγια Σοφία) in Greek, Sancta Sophia in Latin, and Ayasofya or Aya Sofya in Turkish, is a former Byzantine church and former Ottoman mosque in Istanbul. Now a museum, Hagia Sophia is universally acknowledged as one of the great buildings of the world.

nfortunately nothing remains of the original Hagia Sophia, which was built on this site in the fourth century by Constantine the Great. Constantine was the first Christian emperor and the founder of the city of Constantinople, which he called "the New Rome." The Hagia Sophia was one of several great churches he built in important cities throughout his empire.

Following the destruction of Constantine's church, a second was built by his son Constantius and the emperor Theodosius the Great. This second church was burned down during the Nika riots of 532, though fragments of it have been excavated and can be seen today. 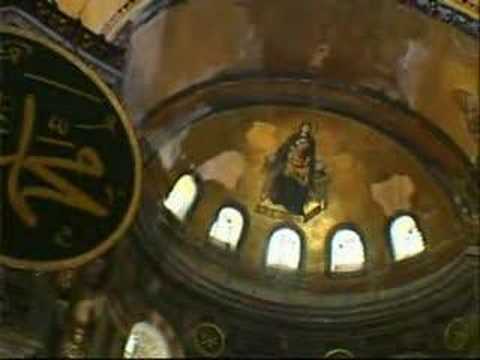 View other events that happened in 360