Standing at the base of the Great Pyramid, it is hard to imagine that this monument—which remained the tallest building in the world until early in this century—was built in just under 30 years.

It presides over the plateau of Giza, on the outskirts of Cairo, and is the last survivor of the Seven Wonders of the World. Five thousand years ago Giza, situated on the Nile's west bank, became the royal necropolis, or burial place, for Memphis, the pharaoh's capital city. Giza's three pyramids and the Sphinx were constructed in the fourth dynasty of Egypt's Old Kingdom, arguably the first great civilization on earth. Today, Giza is a suburb of rapidly growing Cairo, the largest city in Africa and the fifth largest in the world.

The Great Pyramid of Giza (also called the Pyramid of Khufu and the Pyramid of Cheops) is the oldest and largest of the three pyramids in the Giza Necropolis bordering what is now El Giza, Egypt. It is the oldest of the Seven Wonders of the Ancient World, and the only one to remain largely intact. It is believed the pyramid was built as a tomb for fourth dynasty Egyptian Pharaoh Khufu (Cheops in Greek) and constructed over a 20-year period concluding around 2560 BC. The Great Pyramid was the tallest man-made structure in the world for over 3,800 years. Originally the Great Pyramid was covered by casing stones that formed a smooth outer surface; what is seen today is the underlying core structure. Some of the casing stones that once covered the structure can still be seen around the base. There have been varying scientific and alternative theories about the Great Pyramid's construction techniques. Most accepted construction hypotheses are based on the idea that it was built by moving huge stones from a quarry and dragging and lifting them into place.

The Giza Pyramids, built to endure an eternity, have done just that. The monumental tombs are relics of Egypt's Old Kingdom era and were constructed some 4,500 years ago.

Egypt's pharaohs expected to become gods in the afterlife. To prepare for the next world they erected temples to the gods and massive pyramid tombs for themselves—filled with all the things each ruler would need to guide and sustain himself in the next world.

Pharaoh Khufu began the first Giza pyramid project, circa 2550 B.C. His Great Pyramid is the largest in Giza and towers some 481 feet (147 meters) above the plateau. Its estimated 2.3 million stone blocks each weigh an average of 2.5 to 15 tons. 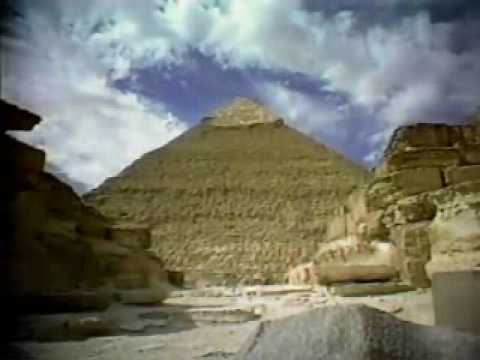 View other events that happened in 2560 BC