Marking the 30th installment of the award show, they were the first to be held in New York City not to use a venue within the borough of Manhattan. Nominations were announced on July 17, 2013. Leading the nominees were Justin Timberlake, Macklemore and Ryan Lewis with six, followed by Bruno Mars, Miley Cyrus, and Robin Thicke with four. Justin Timberlake was the big winner on the night with four awards. Macklemore & Ryan Lewis, Bruno Mars and Taylor Swift were also the other major winners of the night. The ceremony drew a total of 10.1 million viewers.

The show was most notable for 2 Chains, Miley Cyrus, Kendrick Lamar, and Robin Thicke's raunchy and sexually-driven performance of their hit songs "We Can't Stop" , "Blurred Lines" and "Give It 2 U", which received negative reactions from critics and mixed reactions from fans and fellow celebrities. The ceremony also gained mass media attention when 'N Sync made their first appearance together since the group's break up in 2002 during Justin Timberlake's fifteen minute performance leading up to his acceptance speech for the Video Vanguard Award. 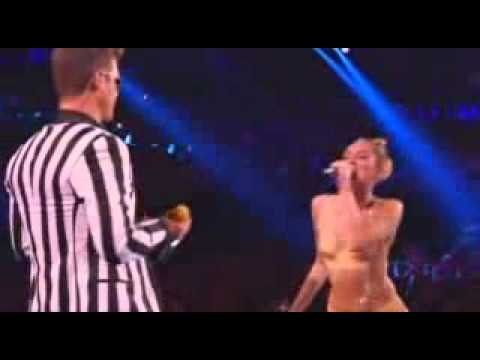