When most people think of a massively multiplayer online role-playing game (MMORPG), they usually think of the most famous one of them all: World of Warcraft.

Heck, even my grandmother has heard of World of Warcraft, but many would be surprised to learn that there are literally hundreds of other MMORPGs out there. One of the most popular MMORPGs in the last decade is Guild Wars, released in 2005 by the small development studio ArenaNet. Ironically enough, ArenaNet was founded by three former employees of Blizzard, the studio that made World of Warcraft, as a way to make a different game that they would like to play above all else. Guild Wars became such a hit that a sequel was announced in 2007.

After over five years of hot anticipation among the game's most loyal fans, Guild Wars 2 launches today.

At its core, Guild Wars 2 is a much different game than most other MMORPGs on the market today. While it does borrow mechanics found in other games, the execution and finesse of said mechanics makes Guild Wars 2 stand out as a unique experience. And that's really what it's about with an MMO. You're not playing the game to simply get to the next level. MMO worlds are created to immerse the players and secure a connection that will last for years.

Guild Wars 2 is a massively multiplayer online role-playing game in development by ArenaNet. Set in the fantasy world of Tyria, the game follows the re-emergence of Destiny's Edge, a disbanded guild dedicated to fighting the Elder Dragons, a Lovecraftian species that has seized control of Tyria in the time since the original Guild Wars. The game takes place in a persistent world with a story that progresses in instanced environments.

Guild Wars 2 claims to be unique in the genre by featuring a storyline that is responsive to player actions, something which is common in single player role-playing games but rarely seen in multiplayer ones. A dynamic event system replaces traditional questing, utilising the ripple effect to allow players to approach quests in different ways as part of a persistent world. Also of note is the combat system, which aims to be more dynamic than its predecessor by promoting synergy between professions and using the environment as a weapon, as well as reducing the complexity of the Magic-style skill system of the original game. As a sequel to Guild Wars, Guild Wars 2 will feature the same lack of subscription fees that distinguished its predecessor from other commercially developed online games of the time, though a purchase is still required to install the game. 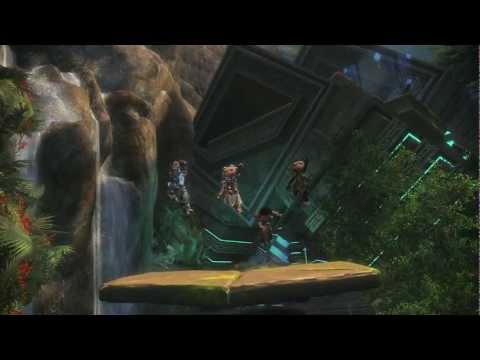