Elena Kagan was sworn in as the 112th U.S. Supreme Court justice and its fourth woman ever, taking the oath of office at the high court two days after the Senate confirmed her.

Kagan, 50, the former dean of Harvard Law School, pledged to "do equal right to the poor and to the rich" as she took the second of two required oaths from Chief Justice John Roberts, who congratulated her and welcomed her to the court.

"We look forward to serving with you in our common calling," Roberts said after administering the oath. A formal investiture will take place on Oct. 1, three days before the justices begin their next term.

Elena Kagan was sworn in on Saturday as the 112th person, and fourth woman, to serve on the Supreme Court, continuing a generational and demographic transformation of the nation’s highest bench.

In keeping with tradition, Ms. Kagan first took the constitutional oath given to a wide array of officials and then the judicial oath administered to those wearing the robe. Joined by family and friends in the Supreme Court building, she swore to “administer justice without respect to persons, and do equal right to the poor and to the rich.”

Source: 'Kagan Is Sworn in as the Fourth Woman, and 112th Justice, on the Supreme Court'; Peter Baker, The New York Times, August 7, 2010, www.nytimes.com. Added by: Colin Harris

Elena Kagan, building on a long, diverse legal career in government and academia, was officially sworn in as the 112th justice at the Supreme Court on Saturday, promising to "faithfully and impartially" discharge her new judicial duties.

With friends, family and four of her new colleagues looking on, the 50-year-old Kagan took the judicial oath in the court's wood-paneled West Conference Room. It was only the second time such a ceremony was televised at the court. 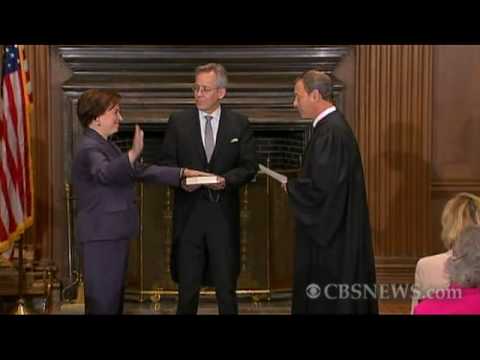