The law doesn’t require you to be a successful crook. It just requires you to be a crook.”

The governor of Illinois cannot exchange some state action for some personal benefit. If you do that it’s a bribe. If you send a message ... talking is the crime here.”

Defendant Blagojevich said sometimes information (about fundraising) splashed on him. It splashed on him the same way water would splash on you if you dive in a swimming pool.”

The closing arguments have now begun, with Assistant U.S. Attorney Christopher Niewoehner launching promptly into a reminder of the most explosive quote that jurors heard on government wiretaps — the one in which Blagojevich is heard allegedly describing his power to profit from a U.S. Senate seat. “I’ve got this thing and its (expletive) golden,” Niewoehner said.

Niewoehner said the alleged attempted sale of the Senate post was just the “culmination of dirty schemes” outlined by prosecutors during the trial.

As he paced slowly back and forth in front of the jury box, Niewoehner harkened back to the opening statements made in early June. During them, he reminded jurors, his colleague, assistant U.S. Attorney Carrie Hamilton, had intoned repeatedly that Blagojevich’s guiding principle as governor was “what about me?”

Patti Blagojevich has now come under the prosecution's fire as Assistant U.S. Attorney Christopher Niewoehner outlines the money she received from fundraiser Antoin “Tony” Rezko during an eight-month period.

The former first lady, who is sitting in the front row of the courtroom with her two young daughters, received $12,000-a-month from Rezko for allegedly questionable real-estate deals.

Prosecutors allege the money was a kickback to the governor.

Don’t miss the forest for the trees was the final message from Assistant U.S. Atty. Christopher Niewoehner for the jury.

It could be easy to get bogged down in the minutiae of each count in the case, but the jury shouldn’t lose sight of the overall conspiracy and who was running it, he said.

“It’s all the same person, and you’ve heard so much evidence about who that person was,” Niewoehner said. It was of course Rod Blagojevich, the former chief executive of the state, he said.
Along the way, the jury heard from 27 different witnesses, including from three of Blagojevich’s former chiefs of staff, three former deputy governors and two finance directors.

All were clear about who was running the show, the same guy who said he had something that was “(expletive) golden,” Niewoehner said. 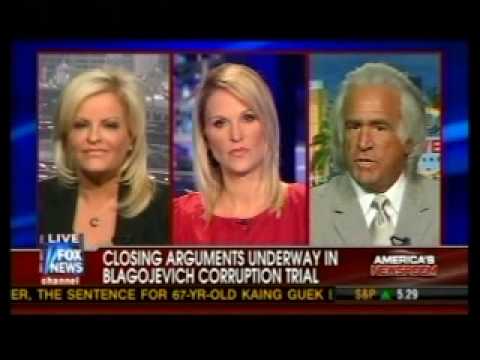