The Afghanistan war logs series of reports on the war in Afghanistan published by the Guardian is based on the US military's internal logs of the conflict between January 2004 and December 2009.

The material, largely classified by the US as secret, was obtained by the whistleblower website Wikileaks, which has published the full archive. The Guardian, along with the New York Times and the German weekly Der Spiegel, was given access to the logs before publication to verify their authenticity and assess their significance.

A team of investigative reporters, regional specialists and database experts spent weeks combing the data for matters of public interest. After establishing the meaning of more than 400 abbreviations and military acronyms they were able to authenticate the logs by comparing them with other records and cross-checking with other sources.

Source: 'Afghanistan war logs: How the Guardian got the story'; The Guardian, July 25, 2010, www.guardian.co.uk. Added by: Colin Harris

The Afghan War documents leak is the disclosure of a collection of internal U.S. military logs of the War in Afghanistan, also called the Afghan War Diary, which were published by Wikileaks on 25 July 2010. The logs consist of 91,731 documents, covering the period between January 2004 and December 2009. Most of the documents are classified Secret As of 28 July 2010, only 75,000 of the documents have been released to the public, a move which Wikileaks says is "part of a harm minimization process demanded by [the] source". Prior to releasing the initial 75,000 documents, Wikileaks made the logs available to The Guardian, The New York Times and Der Spiegel in its German and English on-line edition which published reports per previous agreement on that same day, July 25, 2010.

The leak, which is considered to be one of the largest in U.S. military history, revealed information on the deaths of civilians, increased Taliban attacks, and involvement by Pakistan and Iran in the insurgency. Wikileaks says it does not know the source of the leaked data. The three outlets which had received the documents in advance, The New York Times, The Guardian, and Der Spiegel, have all concluded that they are genuine when compared to independent reports.

The New York Times described the leak as "a six-year archive of classified military documents [that] offers an unvarnished and grim picture of the Afghan war". The Guardian called the material "one of the biggest leaks in U.S. military history ... a devastating portrait of the failing war in Afghanistan, revealing how coalition forces have killed hundreds of civilians in unreported incidents, Taliban attacks have soared and NATO commanders fear neighbouring Pakistan and Iran are fuelling the insurgency". Der Spiegel wrote that "the editors in chief of Spiegel, The New York Times and the Guardian were 'unanimous in their belief that there is a justified public interest in the material'."

Some time after the first dissemination by WikiLeaks, the US Justice Department were considering the use of the U.S. Espionage Act of 1917 to prevent WikiLeaks from posting the remaining 15,000 secret war documents it claimed to possess.

A total of 91,731 reports from United States military databanks relating to the war in Afghanistan are to be made publicly available on the Internet. Never before has it been possible to compare the reality on the battlefield in such a detailed manner with what the US Army propaganda machinery is propagating. WikiLeaks plans to post the documents, most of which are classified, on its website.

Britain's Guardian newspaper, the New York Times and SPIEGEL have all vetted the material and compared the data with independent reports. All three media sources have concluded that the documents are authentic and provide an unvarnished image of the war in Afghanistan -- from the perspective of the soldiers who are fighting it.

The articles published today are based on thousands of United States military incident and intelligence reports — records of engagements, mishaps, intelligence on enemy activity and other events from the war in Afghanistan — that were made public on Sunday on the Internet. The New York Times, The Guardian newspaper in London, and the German magazine Der Spiegel were given access to the material several weeks ago. These reports are used by desk officers in the Pentagon and troops in the field when they make operational plans and prepare briefings on the situation in the war zone. Most of the reports are routine, even mundane, but many add insights, texture and context to a war that has been waged for nearly nine years.

Over all these documents amount to a real-time history of the war reported from one important vantage point — that of the soldiers and officers actually doing the fighting and reconstruction.

Source: 'Piecing Together the Reports, and Deciding What to Publish'; The New York Times, July 25, 2010, www.nytimes.com. Added by: Colin Harris 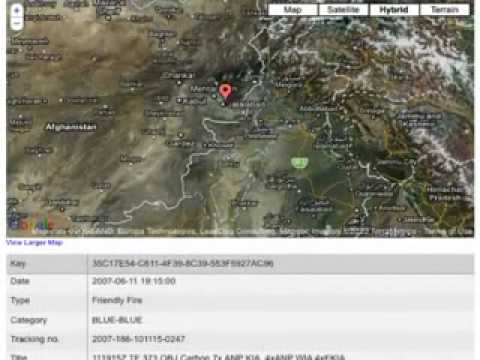