At least 230 people were killed and 190 injured when an oil tanker flipped over and exploded in the Democratic Republic of Congo, a government spokesman said Saturday.

While the spokesman, Mende Omalanga, said five of the dead were United Nations peacekeepers, an official with the U.N. mission in the capital of Kinshasa contradicted the report.

"No U.N. members were killed" in the explosion, said Madnodje Mounoubai.

The tanker flipped over Friday afternoon, said Omalanga, the country's minister of communications. It was attempting to overtake a bus in Sange, in South Kivu province, on the country's eastern border.

The accident happened late on Friday in Sange, about 70km (40 miles) south of the town of Bukavu in South Kivu.

The truck, travelling from Tanzania, overturned and began leaking fuel.

"Petrol began to leak out but instead of fleeing people came to collect the fuel," Mr Sahizira said.

"A few minutes later there was an explosion, flames burst from the truck and spread very quickly."

Several homes with thatched roofs were engulfed in flames, as was the cinema where a crowd had gathered to watch the World Cup.

A fuel truck exploded and set fire to a village in eastern Democratic Republic of Congo, killing at least 221 people and injuring almost an equal number, the Red Cross said Saturday.

Flames engulfed dozens of earth and straw constructed homes after villagers, many of them children, crowded around the tanker which overturned late on Friday.

Desire Kama from the Congolese Red Cross said according to a provisional estimate at 1100 GMT, there were 221 deaths -- of whom 61 were children and 36 women -- and 214 were injured. 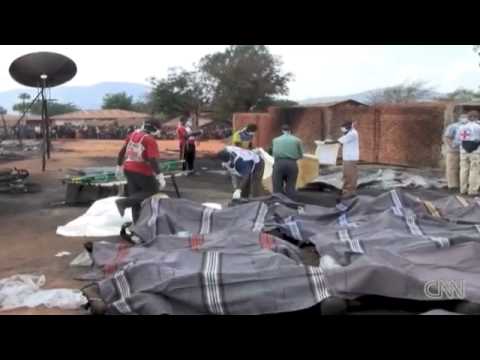