The Stanley Cup Finals ended Wednesday night with a 4-3 overtime victory by the Chicago Blackhawks over the Philadelphia Flyers, giving Chicago a 4-2 series win and its first Stanley Cup since 1961.

Their 49-year drought was the longest in the NHL, and would have provided a wonderful main storyline for the victory had the team not presented several from which to choose.

There was the shot that won it. Patrick Kane, for a few seconds, was the only one celebrating the goal he had just scored. No red light flashed and no horn sounded, but Kane celebrated and his teammates joined in. A brief video replay confirmed that the puck had, indeed, crossed the line, and the celebration ramped up into high gear.

Almost half a century of waiting for a Stanley Cup taught Blackhawks fans to be patient.

But an emotionally draining Game 6 in Philadelphia’s Wachovia Center still seemed to last an eternity for the thousands of fans packed into parties and bars across the Chicago area Wednesday night.

Then Patrick Kane scored the overtime winner, and they erupted.

Thousands of fans surged out onto the streets of Chicago on Wednesday night to celebrate after the Blackhawks won the Stanley Cup. They wore team jerseys, waved banners, and carried memories, long memories, in many cases.

"We're a hockey family, been down for generations and I honestly could not be more thrilled. This is a night I'll always remember," said Jeremy Holleb of suburban Highland Park, after the Hawks won the National Hockey League championship on the road with a 4-3 overtime victory over the Flyers at Philadelphia night.

Holleb was among the fans who gathered at Harry Carry's Tavern on Navy Pier near downtown, where Bobby Hull, a star of the Blackhawks' last Stanley Cup-winning team in 1961, was watching the game and signing autographs. 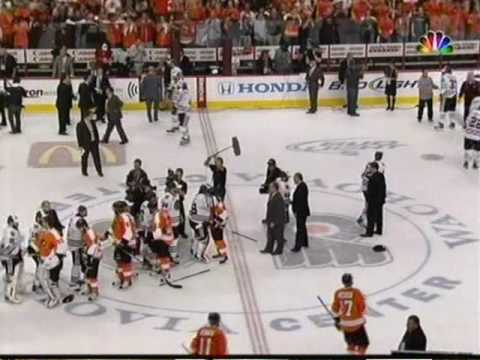