If I can get J.B. [Pritzker] to do something like that, is it worth giving him the Senate seat?”

If I get nothing back from Obama, then I'm going another direction.”

I mean the arrogance of these (expletive) people [Obama and team].”

Rod Blagojevich and his staff have twice today been heard talking about leaking faulty information to the media -- information they believed would give them more leverage in their alleged negotiations over the Senate seat appointment, Doug Scofield said.

First, Scofield testified that Blagojevich asked him one day about an item that had run in Michael Sneed's Sun-Times column that said Lisa Madigan was a strong candidate for the Senate seat.

That item had been "placed" by Blago's camp, Scofield said.

Later, Scofield mentioned another Blago leak to Michael Sneed -- this time, that Jesse Jackson Jr. was a lead contender.

Jurors are now hearing a Nov. 11, 2008 tape in which the ex-governor complains about a message that John Wyma sent to him through Rahm Emanuel. The message: that Blagojevich could expect "gratitude and appreciation" for a Valerie Jarrett appointment.

"How about a 501(c)(4) so I can advocate child's health care?," Blago complains on a call to Doug Scofield, adding that he'd like that nonprofit set up "right away."

This afternoon, prosecutors have played another tape where Rod Blagojevich relays his interest in the 501 (c) (4) set up in exchange for the Valerie Jarrett appointment.

"He'd like Rahm to have funding for a 501 (c) (4) in his head as soon as possible," prosecution witness Doug Scofield, testified about the recording. "My strategic goal would be for Rahm to have this in his head sooner rather than later, like today or tomorrow."

Blagojevich says in the recording that $15 million shouldn't be difficult for the Warren Buffett types.

Defense lawyer Aaron Goldstein takes on the infamous "f------ golden," tape with government witness Doug Scofield, who was on the other end of that call.

Goldstein points out that time and again in the call, Scofield says "yeah" or "right" in response to Rod Blagojevich's talk about what he could get in exchange for the Senate seat appointment.

Goldstein is asking Scofield to explain what Blagojevich means when he says:
"I mean, I've got this thing and it's f----- golden."

Scofield: "This thing was his ability to appoint a senator and by golden he meant it was very valuable.

We are entering a slow zone in the trial, where Goldstein is time again making a point to show where Scofield appears to be agreeing with Rod Blagojevich's ideas -- and openly encourages them on various recordings.

A couple of people in the gallery are actually asleep.

Goldstein appears to be scoring some points, flagging various conversations where Scofield has to admit he's either lying to Blagojevich or placating him.

In 2008, Scofield talked to Blagojevich about 20 times.

They were "more memorable than you can probably imagine," Scofield said.

Goldstein: "Is it fair to say you took action to help out Rod Blagjoevich?"

One theme the Rod Blagojevich defense has tried to slip into a number of cross-examinations is that the governor was surrounded by lawyers on his staff who didn’t step in to stop Blagojevich’s bids to trade the Senate appointment or tell him he was committing a crime.

One meeting that Blagojevich adviser Scofield was in with the governor also included chief of staff John Harris, general counsel William Quinlan and Deputy Gov. Bob Greenlee. Three lawyers, Goldstein pointed out, did any of them object?

The jury is listening to more calls this afternoon that appear to show Rod Blagojevich crafting a message for the Obama camp that he would like to be put in charge of a non-profit organization that would provide him a safe place to land after his time as Illinois governor.

Blagojevich can be heard asking adviser Doug Scofield to get a message relayed to Rahm Emanuel that he wants such a job, and “it’s unrelated to the other stuff.” But Scofield testified again that that was just a play to get things moving, and the job would be connected to Blagojevich picking someone for the U.S. Senate that Obama wanted.

“He’s describing how he’d like it relayed, though it is in fact related,” Scofield told the jury.

The messenger, who would be lobbyist John Wyma, should just make a suggestion to Emanuel.

The afternoon session has started with political adviser Doug Scofield talking about conversations he had with Rod Blagojevich after it became known that Valerie Jarrett was no longer interested in serving in the U.S. Senate.

The fact that Jarrett would be headed to the Obama White House began to be reported in the media on Nov. 12, 2008, Scofield said. The first recording heard by the jury this afternoon was made the next day.

“They’re gonna put Valerie in the administration,” Scofield said in the recording.

He again raised the idea of getting wealthy businessmen to pour millions of dollars in a non-profit advocacy group that Blagojevich could head once he was no longer governor. At one point he floated the idea of getting millionaire J.B. Pritzker, one of the heirs to the Hyatt hotel fortune, to put up the money in exchange for naming Pritzker to Obama’s Senate vacancy.

“I betcha J.B. can raise money like that for a Senate seat,” Blagojevich said. “…If I get J.B. to do something like that is it worth giving him the Senate seat?”

Scofield said such a deal would look bad and be hard to pull off.

“Your darn right it’s hard,” acknowledged Blagojevich, not yet willing to let the idea go. “I really believe you can do more good than just putting (Obama friend) Valerie Jarrett in (the Senate) there and getting nothing back.” 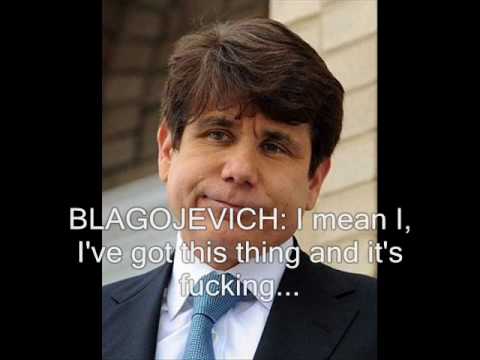