Robert C. Byrd, the longest-serving senator in U.S. history and an ardent defender of the chamber's traditions, died Monday.

Byrd was best known for his ardent defense of the U.S. Constitution and his love of Senate history. He was also a man who fought the 1964 Civil Rights Act — to his later regret — but who took great pride in his fight against authorizing the use of force in Iraq.

He was not only the author of an award-winning four-volume history of the Senate; he was also, from the time he joined the chamber in January 1959, a major player in much of that history. He was a two-time majority leader and was chairman of the powerful Appropriations Committee.

U.S. Senator Robert Byrd, who evolved from a segregationist to a civil rights advocate in becoming the longest serving member ever of the Congress, died on Monday, a spokesman for the West Virginia Democrat said.

Byrd's death is not expected to have any immediate impact on the Democrats' 59-41 control of the Senate. West Virginia Governor Joe Manchin is virtually certain to appoint a fellow Democrat to succeed Byrd, whose current term expires in 2012.

Senator Robert Byrd of West Virginia, the longest-serving senator in American history, died Monday at the age of 92, a spokesman for the family said.

Byrd, a Democrat who served in the U.S. Senate since 1959, had been plagued by health problems in recent years and was confined to a wheelchair. He had skipped several votes in Congress in the past months.

Robert C. Byrd, the longest serving member of the U.S. Senate, a fiery orator and hard-charging power broker who steered billions of federal dollars to his beloved West Virginia, died Monday. He was 92.

A spokesman for the family, Jesse Jacobs, said that Byrd died at about 3 a.m. at Inova Hospital in Fairfax, Va., where he had been since late last week. Byrd had been in frail health for several years.

A man of humble, Depression-era upbringing, Byrd held his seat for over 50 years, working tirelessly all that time to make sure his state never missed out on its share - or even more, in some cases - of the federal largesse. He was the Senate's majority leader for six of those years and was third in the line of succession to the presidency, behind House Speaker Nancy Pelosi. 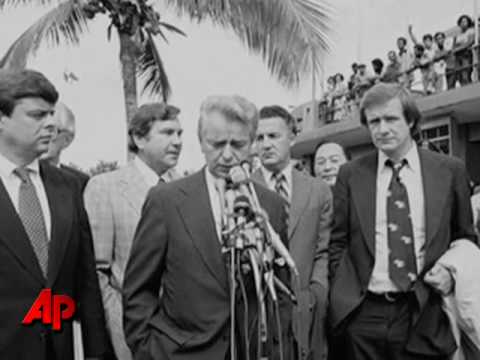