Georges Moyen, the health minister, warned the toll could rise because 16 of the wounded were in critical condition following Monday night's crash.

Many more victims may still be pulled from the wrecked carriages.

President Denis Sassou-Nguesso called a meeting of top government officials on Tuesday in the Central African nation that is often overshadowed by its much larger neighbour, Congo.

The train was leaving the coastal town of Pointe-Noire and was headed to the capital, Brazzaville, when it derailed, said Jean Miche Ibinda, spokesman for the rail company. Army and Red Cross officials rushed to the scene of the accident to help the victims, he said.

About 60 people have been killed in a train crash in the south of Congo-Brazzaville, officials have said.

The head of the rail operator, Chemin de Fer Congo-Ocean (CFCO), said it occurred on Monday night about 60km (37 miles) from the city of Pointe-Noire.

The train is believed to have derailed as it went round a corner in a remote area between Bilinga and Tchitondi, throwing four carriages into a ravine.

The dead and wounded have been taken to hospitals and morgues in Pointe-Noire.

At least 48 people have been killed and more than 400 injured after a packed train crashed and plunged into a ravine in the Republic of Congo.

Government officials have already blamed the crash on excessive speed and called for three days of national mourning.

The train had left the coastal town of Pointe-Noire and was heading to the capital, Brazzaville, when it derailed.

Government spokesman Bienvenu Okiemy said: "According to the facts on the ground, excess speed is the main cause of this train accident."

The Yanga train derailment occurred on 21 June 2010 when a train travelling between Brazzaville and Pointe Noire in the Republic of the Congo was derailed and plunged into a ravine. At least 60 people were initially reported to have been killed and hundreds disappeared with the death toll expected to rise further. The death toll had risen to 76 people and the injury toll had risen to 745 by 23 June 2010.

The derailment compares with a similar incident which killed 100 people and injured 300 others in the Republic of the Congo's deadliest such incident in the country's history back in September 1991. A chronological list of rail accidents since 2002 provided by The Daily Telegraph suggests this is the deadliest rail disaster since 28 April 2008 when at least 70 people were killed in China. 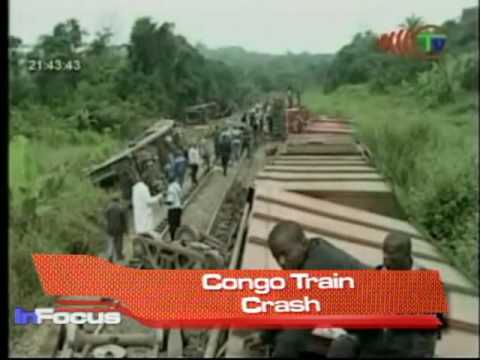