"Stick it, A-Rod," Lindsey said, minutes after a career-defining moment for Braden, who has been engaged in a war of words with the Yankee star since mid-April over unwritten rules about the pitcher's mound.

It was just three days ago that a video of Braden talking about a fight with A-Rod surfaced, to which the Yankee star responsed by saying he didn't "want to extend (Braden's) 15 minutes of fame."

Braden pitched the 19th perfect game in major league history on Sunday, shutting down the majors' hottest team and leading the Oakland Athletics to a 4-0 victory over the Tampa Bay Rays.

Braden threw his arms in the air after Gabe Kapler grounded out to shortstop for the final out, his simmering feud with Yankees star Alex Rodriguez merely a footnote to the first perfect game for Oakland in 42 years.

The closest the Rays got to a hit was Jason Bartlett's liner to third leading off the game. Evan Longoria tried to bunt leading off the fifth, drawing boos from the small crowd.

"Pretty cool," Braden said. "I don't know what to think about it just yet. There's definitely a select group. I'd like to have a career more than today."

Before this gem, Braden was best known for his enraged reaction to Rodriguez walking across the mound on April 22. Still angry after the game, he told the slugger "to go do laps in the bullpen" if he wanted to traipse across a mound.

The squabble was still simmering last week. On Friday in Boston, Rodriguez said he didn't want to extend Braden's "extra 15 minutes of fame."

"I've learned in my career that it's always better to be remembered for some of the good things you do on the field, and good for him," Rodriguez said before facing Boston. "He threw a perfect game. And, even better, he beat the Rays."

That said, Braden's grandmother may have gotten the last word:

Dallas Braden can talk all he wants now.

The Oakland Athletics pitcher who has made a name for himself through a verbal feud with Yankees star Alex Rodriguez nailed down a far more noteworthy achievement Sunday, retiring 27 Tampa Bay Rays batters in order to complete the 19th perfect game in major league history.

The left-hander set down Willy Aybar, Dioner Navarro and Gabe Kapler in the ninth inning to nail down his 4-0 gem. Kapler grounded to shortstop Cliff Pennington for the final out.

"I never imagined all those goose eggs," Braden told A's television afterward. "You just go out there and try to compete."

The Rays also were victimized in the most recent perfect game, by Mark Buehrle of the White Sox in Chicago last July 23. Oakland did have one of the previous perfect games, by Catfish Hunter against the Twins on May 8, 1968. 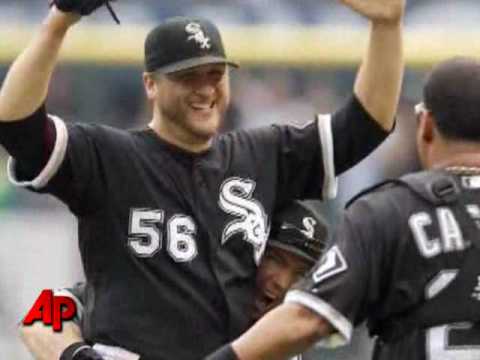