A day after a major train accident involving the Howrah-Kurla Jnaneswari Express and a goods train here, the death count rose to 141 on Saturday while more than 180 injured passengers are admitted to hospitals in Paschim Medinipur district and in Kolkata.

The death toll could rise, with more bodies feared still trapped under the debris of the mangled coaches.

Thirteen coaches of the express jumped the track between the Khemasuli and Sardiha stations in the early hours of Friday and an oncoming goods train rammed the derailed coaches, resulting in one of the worst rail disasters in the recent times.

Hours before he was named as the prime suspect in the Jnaneswari train disaster, Bapi Mahato told The Indian Express that he was “sorry” for what had happened, and that the targeting of the passenger train was a “mistake”.

At least 145 people were injured - many critically - when two trains collided overnight in West Bengal.

Police said Maoist rebels sabotaged the track causing the Calcutta-Mumbai passenger train to derail, throwing five of its carriages into the path of an oncoming goods train.

But a spokesman for the Maoist rebels called the BBC to deny any involvement.

A railway spokesman said 78 bodies had been recovered, but that more than 30 remained trapped in three carriages that were crushed by the freight train.

At least 65 people have been killed and dozens more injured after an overnight passenger train derailed in eastern India, flinging its coaches into the path of an oncoming goods train.

A spokesman for Indian railways said sabotage was suspected as the cause of Friday's collision.

The passenger train, which was going to Mumbai from Kolkata, the eastern Indian state of West Bengal, was derailed in the state's Jhargram area at around 1:30am (2000 GMT).

Some officials said an explosion had caused the train to come off the rails, but others said the tracks appeared to have been tampered with. 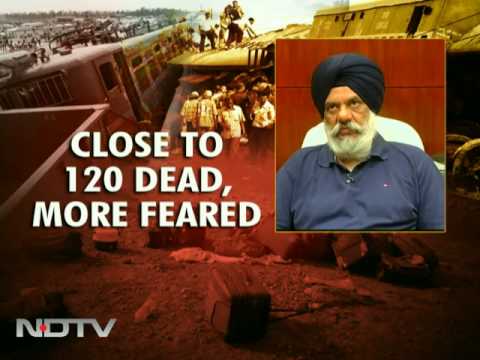 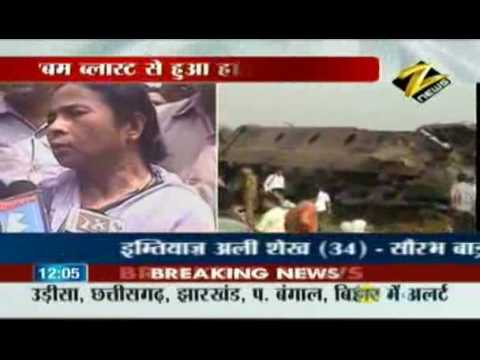