Art Linkletter, the genial host who parlayed his talent for the ad-libbed interview into two of television’s longest-running shows, “People Are Funny” and “House Party,” in the 1950s and 1960s, died on Wednesday at his home in the Bel Air section of Los Angeles. He was 97.

The death was confirmed by Art Hershey, a son-in-law.

From his early days as an announcer on local radio and a roving broadcaster at state fairs, Mr. Linkletter showed a talent for ingratiating himself with his subjects and getting them to open up, often with hilarious results.

Art Linkletter, the easygoing, smooth-voiced emcee famed for his long-running hosting gigs of the radio and television shows "House Party" and "People Are Funny," and author of "Kids Say the Darndest Things," has died, according to his spokeswoman.

Linkletter "died peacefully at home with his family on Wednesday," a statement from the family said. He was 97.

Art Linkletter, the radio and television talk-show pioneer who was best known for eliciting hilarious remarks from the mouths of babes and who late in life was a popular motivational speaker and author, challenging seniors to live as zestfully as he did, has died. He was 97. 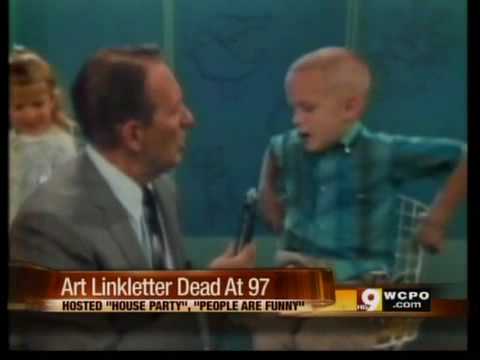