The death toll from a train derailment in east China Sunday has risen to 19, said rescue authorities.

Another 71 people were injured, 11 of them seriously, after the accident in Jiangxi Province, said a statement from the rescue headquarters.

A spokesman of the headquarters said the train and 8,000 cubic meters of mud and rocks from the landslide were removed from the tracks, after 2,000 rescuers using heavy machinery completed the rescue operation.

A passenger train in eastern China's Jiangxi province has derailed, killing at least 19 passengers and injuring 71.

The train, heading from Shanghai to the resort city of Guilin in the southwest region of Guangxi, was caught in a landslide as it passed through the city of Fuzhou in Jiangxi's storm-hit mountain districts in the early hours of this morning.

A landslide has caused the derailment of a passenger train in south-east China, with at least 19 people killed and 71 injured.

The train crashed into dirt and debris blocking the tracks in a mountainous area of Jiangxi province at 0210 (1810 GMT), the railway ministry said.

It had been making its way from Shanghai to the tourist area of Guilin.

At around 2:10 am on 23 May 2010, train K859 travelling from Shanghai to Guilin derailed in a mountainous area in Dongxiang County, within Fuzhou City, Jiangxi. At least 19 people died, and 71 were injured. A total of at least 53 people were rescued and another 280 were taken from the train. The death toll was expected to rise. Within 12 hours all survivors had been removed as the rescue effort got underway. 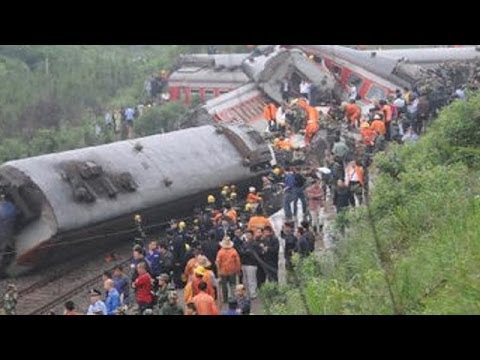