As of Wednesday, flooding in China has killed 392 people this year, with 143 still missing, the nation' s flood control authority said Wednesday.

Torrential rains have pounded 23 provincial-level regions, which have affected 72.97 million people and 4.63 million hectares of farmland, according to data from the Office of State Flood Control and Drought Relief Headquarters.

The office ordered authorities involved in emergency activities to ramp up anti-flood measures on Wednesday, stepping up efforts to ensure that reservoirs are not breached by rising waters.

The 2010 China floods began in early May 2010. 392 people had died, and a further 232 people had been reported missing as of June 30, 2010, including 57 people in a landslide in Guizhou. 53 of the deaths occurred from the flooding and landslides between May 31 and June 3, and 266 deaths occurred between June 13 and June 29. 424 people were killed by the end of June, including 42 from the Guizhou landslide; 277 more were killed and 147 left missing in the first two weeks of July, bringing the death toll as of August 5 to 1,072. A landslide in early August in Gansu killed at least 337 people and left 1,148 missing. More than 140 million people in 28 provinces, municipalities and regions, especially the southern and central provinces and regions of Zhejiang, Fujian, Jiangxi, Hubei, Hunan, Guangdong, Guangxi, Chongqing Municipality, Gansu, Sichuan and Guizhou, and the northeastern province of Jilin have been affected, while at least 4.66 million people have been evacuated because of the risk of flooding and landslides in the latter half of June. By early August, 10.42 million people had been evacuated.

Millions lack drinking water. A total of 1.1 million houses have been destroyed and more than 97,200 square kilometers (24 million acres) of crops have been innundated, while 800,000 ha (2,000,000 acres) of farmland have been completely destroyed. Dozens of rivers remain in flood, including the Pearl River in Guangdong province, which was impacted by severe drought during the spring as its outflow was severely reduced. The total damages from the floods were roughly 83.8 billion yuan as of June 27, 2010, and almost 210 billion yuan (31 billion USD) by August 5. 4.63 million hectares of farmland have been affected by the flooding.

In late May 2010, heavy rainfall caused a train derailment in Jiangxi, killing at least 19 people, and the closure of the Shanghai-Kunming railway line for 24 hours due to a landslide.

Many major rivers in China, including the Yangtze, Yellow and Songhua Rivers have been flooded to danger levels. The Chinese Government has allocated over 2.1 billion yuan for rescue and relief work. The Jialing River, Han River and Huai River have also surged higher than warning levels.

Floods have killed at least 88 people and left 48 missing amid torrential downpours that have forced around three-quarters of a million people in China to flee their homes.

The rain has been virtually unrelenting since Sunday and with further rain forecast the disaster is set to worsen.

China's second-largest waterway, the Pearl River, which crosses the south, could burst its banks at any time after the water level passed warning markers on Thursday.

In the southeastern province of Fujian alone, 25 people were reported to have died in landslides caused by the rains and 15 more were said to be missing.

Flooding swept away crops, houses and damaged power equipment in North Korea, battering an economy already straining under international sanctions and struggling with shortages of food and goods.

Floods and landslides across Asia plunged millions into misery Sunday as rubble-strewn waters killed at least 127 in northwestern China and 4 million Pakistanis faced food shortages amid their country's worst-ever flooding. 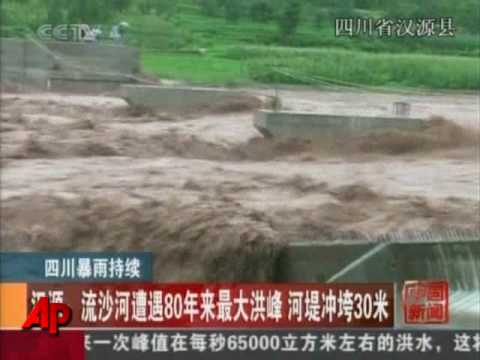