Metal Detectorist Dave Crisp Discovers a Hoard of Roman Coins Worth Over £300,000

The Frome Hoard is a hoard of 52,503 Roman coins found in April 2010 by metal detectorist Dave Crisp near Frome in Somerset, England.

The coins were contained in a ceramic pot 45 cm (18 in) in diameter, and date from AD 253 to 305. Most of the coins are made from debased silver or bronze. The hoard is one of the largest ever found in Britain, and is also important as it contains the largest group ever found of coins issued during the reign of Carausius, who ruled Britain independently from 286 to 293 and was the first Roman emperor to strike coins in Britain. The Museum of Somerset in Taunton hopes to acquire the hoard, which has been officially valued at £320,250.

The hoard of more than 52,000 coins dating from the 3rd Century AD was found buried in a field near Frome in Somerset.

The coins were found in a huge jar just over a foot (30cm) below the surface by Dave Crisp, from Devizes in Wiltshire.

"I have made many finds over the years, but this is my first major coin hoard," he said.

In April 2010, Dave Crisp started to find some late Roman silver coins scattered across a field near Frome – these 62 coins represent a scattered hoard, probably from the same find as 111 similar coins found on the farm in 1867.

However, in pursuit of these coins he had an unusual signal. He dug down 18 inches to find some pottery and coins; he realised that this was the top of a coin hoard so he stopped and filled the hole in. This was incredibly responsible behaviour that cannot be praised enough. Dave immediately contacted his Finds Liaison Officer in Wiltshire, Katie Hinds, who then contacted her opposite number in Somerset, Anna Booth. 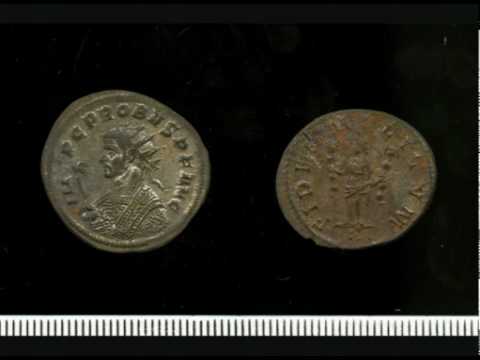