The bodies of at least 37 children and 27 women have so far been recovered by police in Kunda, Uttar Pradesh.

The stampede broke out as thousands of people jostled each other to get free clothes and utensils being distributed during a religious ceremony.

An unfinished gate collapsed on the crowd as people surged forward towards a local holy man, police said.

About 44 worshippers were injured in the crush.

At least 63 people, including women and children, have been killed in a stampede after the gate of a Hindu temple collapsed in the northern Indian state of Uttar Pradesh, police said.

The tragedy struck as hundreds of people had gathered for a religious festival at the temple in Pratapgarh district, some 650km southeast of Delhi.

It is still unclear what caused the gate to collapse.

A stampede at a Hindu temple in northern India killed at least 63 people today – mostly women and children – as thousands of devotees rushed to receive free clothes and food.

Local officials said another 44 people were injured in the crush at a temple compound in Kunda, a small town 110 miles (177km) southeast of Lucknow, the capital of the poor northern state of Uttar Pradesh.

Another 28 were injured in the accident inside the hermitage of Hindu spiritual guru Kripaluji Maharaj in the Pratapgarh district, 180 kilometers south-east of the state capital, Lucknow.

Senior district official KS Charan told reporters that 63 bodies were recovered from the site and more people might have been killed.

The majority of the dead were children and women, the official said, adding that the stampede had claimed most of its victims from the "weakest" of the crowd. 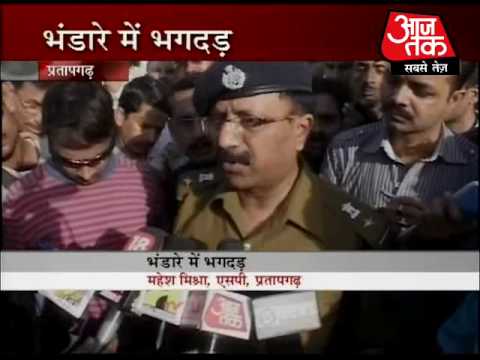