Congress gave final approval on Sunday to legislation that would provide medical coverage to tens of millions of uninsured Americans and remake the nation’s health care system along the lines proposed by President Obama.

Late Sunday night, Obama's presidency, written off by so many, was resurrected. In securing passage of healthcare reform in the House of Representatives - a holy grail for Democratic presidents going back to at least the New Deal years, and one seen by many as being impossible in the wake of Senator Brown's election - Obama has reclaimed control of his political narrative.

Together, the two measures would present the president with a long-sought triumph for the signature domestic agenda of his presidency, a bid to offer health insurance to an estimated 32 million Americans who are uninsured and improve the coverage of those with insurance. 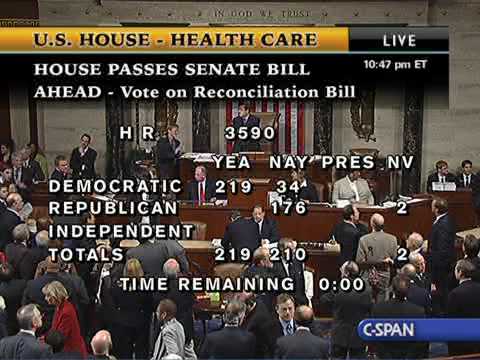