On 4 November 2010, the Aero Caribbean ATR-72-212 operating the route crashed in the central Cuban province of Sancti Spíritus, killing all 61 passengers and 7 crew members aboard. As of 5 November 2010, it is the deadliest accident involving the ATR 72, and the third deadliest aviation accident in Cuba.

The flight originated in Port-au-Prince, Haiti. The aircraft departed Santiago de Cuba en route to Havana around 16:50 local time (20:50 UTC). It was the last flight out of Santiago de Cuba airport before it was closed because of the approach of Hurricane Tomas. At 17:42, the aircraft crashed near the town of Guasimal in Sancti Spíritus province, some 210 miles (340 km) southeast of Havana, after issuing an emergency call. Witnesses said the plane was "flying low and appeared unstable ... pouring out smoke and fire", before hearing an explosion.

Medical facilities in Guasimal were put on alert to prepare for emergency patients. However, by midnight they were told to stand down as no survivors were expected.

An ATR-72-212 passenger plane, registration CU-T1549, was destroyed in an accident near Guasimal, Sancti Spiritus Province, Cuba. All 68 on board were killed. The airplane operated on Aerocaribbean Flight 883 from Santiago-Antonio Maceo Airport (SCU) to Havana-José Martí International Airport (HAV).

The pilot radioed an emergency at 17:42. Contact was then lost. The airplane crashed in mountainous terrain.

The so-called black box will be turned over to investigators trying to determine why the twin-engined ATR turboprop careened from the sky, trailing smoke and flames, witnesses said, as the pilot fought to keep it flying.

The plane crashed on Thursday near the small town of Guasimal in Sancti Spiritus province, 210 miles southeast of Havana.

According to state-run news service AIN, officials said the aircraft was completely destroyed by the impact and resulting explosion, and all the victims' bodies were badly burned.

The state-run Aerocaribbean aircraft had been flying from the eastern city of Santiago de Cuba to Havana.

The passengers included 28 foreigners. The other 33 passengers and seven crew members were all Cuban. There is no word on the cause of the crash.

However, both the data and voice flight recorders have now been located, investigators say.

"The black box and the voice recorder of the crashed plane... were found, so the investigation that is under way will have the basic elements to work with," Rolando Diaz, a prosecutor, told local media.

A plane reportedly carrying 68 people crashed in central Cuba on Thursday and there were no initial reports of survivors, according to state-run news media and sources at Havana and Santiago de Cuba airports.

The plane was said to have left Santiago de Cuba en route to Havana around 4 p.m. and went down near the town of Guasimal in Sancti Spiritus province after issuing an emergency call.

Rescue workers on Friday pulled bodies from the charred wreckage of a state airliner that went down in rugged central Cuba, as desperate relatives gathered at the capital's airport and called foreign embassies seeking information on their loved ones.

All 68 people aboard AeroCaribbean Flight 883 were killed when the turboprop plane went down Thursday afternoon in a remote area near the village of Guasimal in Sancti Spiritus province.

Twenty-eight foreigners were among the dead, including nine Argentines, seven Mexicans, and citizens of Germany, Holland, Spain and Italy. One Japanese national was also on board and Australia's government said in a statement that Cuban officials had confirmed that two Australian women were on the plane. It was Cuba's worst air disaster in more than 20 years. 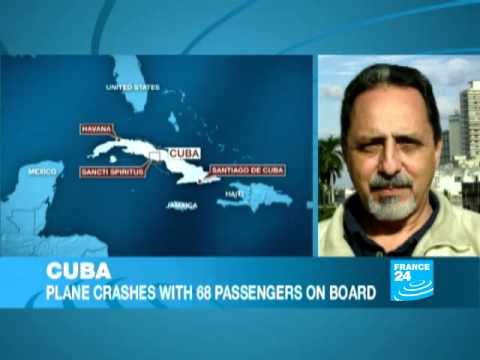