Thousands of Cambodians were on the streets to mark the end of the festival when the crowd rushed onto a bridge connecting the capital city to an island.

Survivors said the panic started on Koh Pich, or Diamond Island, where a concert was being held, when shouts went up that several people had been electrocuted.

Many people were crushed underfoot or fell over the side of the bridge into the water.

Government spokesman Phay Siphan said at least 378 people had been killed and 755 injured but added this was not the final casualty count.

Families in the Cambodian capital Phnom Penh have been scouring morgues and hospitals in search of relatives missing after a deadly stampede.

Search teams have also been trawling a river for bodies after the crush on a footbridge left at least 378 people dead and hundreds more injured.

Prime Minister Hun Sen declared Thursday a day of mourning and promised an investigation into the disaster.

The stampede happened on the final day of the traditional Water Festival.

A stampede during an annual water festival in the Cambodian capital Phnom Penh on Monday left at least 330 people dead, according to state TV reports, and the toll is likely to rise. More than two million people are taking part in the festival.

A stampede during an annual water festival in the Cambodian capital Phnom Penh on Monday left at least 330 people dead, state television reported.

"This is the biggest tragedy since the Pol Pot regime," Cambodian Prime Minister Hun Sen said in a live television broadcast, referring to the leader of the brutal regime that ruled between 1975 and 1979.

After the dead, the dying and the injured had been removed, the hundreds of abandoned shoes that littered Diamond Island's north bridge still served as a grim reminder of the chaos that had last night turned one of the most joyful events in the Cambodian calendar to tragedy.

The crush is thought to have started at around 10pm, on the third and final day of the Water festival, which is estimated to attract around a third of the country's 14 million population each year to Cambodia's capital, Phnom Penh.

The stampede began at 21:30 local time on a bridge across the river, though witnesses said that people had been "stuck on the bridge" for several hours before, and victims were not freed until hours after the actual stampede occurred. 347 people died, and upwards of 755 more people were injured, some seriously, and many local hospitals were pushed far beyond capacity by the influx of victims. At one point, the death toll had been listed as being 456, but on 25 November, the government decreased its official death toll to 347, based on the total put forth by Cambodian minister of social affairs Ith Sam Heng.

A witness said the cause of the stampede was "too many people on the bridge and...both ends were pushing. This caused a sudden panic. The pushing caused those in the middle to fall to the ground, then [get] crushed." While trying to get away from the stampede, he said that people pulled down electrical wires, causing more people to die of electrocution. These claims were backed up by one of the doctors treating patients, who said that electrocution and suffocation were the primary causes of death among the casualties, though the government disputed the claims of electric shock.

A journalist from The Phnom Penh Post said that the stampede had occurred due to police forces firing a water cannon into people on the bridge in an attempt to force them to move off the bridge after it began swaying, which had triggered panic among those on it.

Information Minister Khieu Kanharith said that the stampede began when panic broke out after several people fell unconscious on the crowded island. 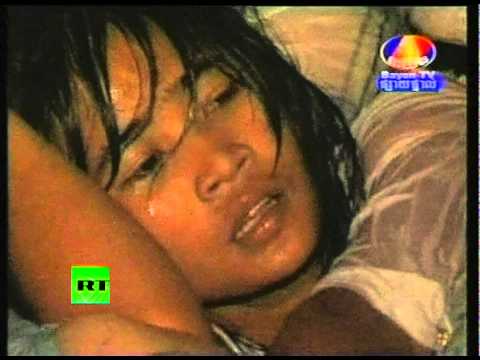 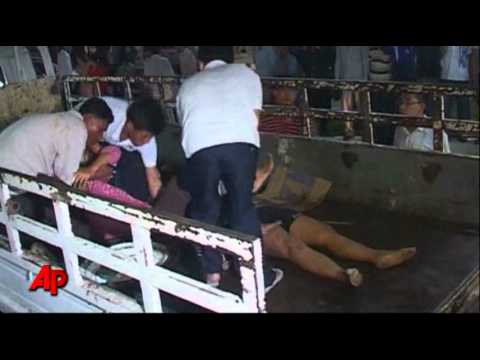 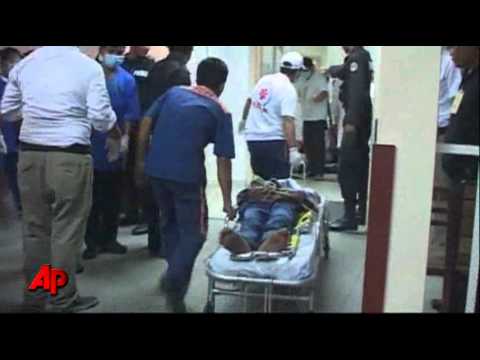 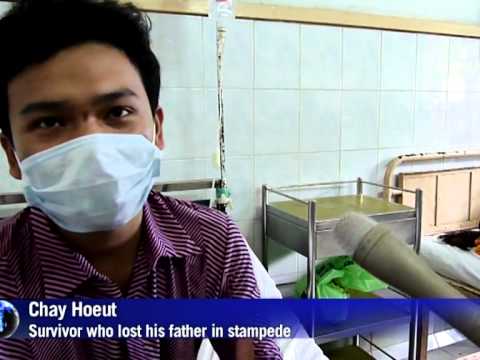