An autopsy was performed on Andy Irons yesterday in Texas, but the Tarrant County medical examiner won't know for several weeks why the three-time world surfing champion from Kauai died, pending toxicology reports.

The surfing world is mourning the shock death of three-time world champion Andy Irons at the age of 32.

Irons was forced to withdraw from round one of the current Rip Curl Pro Search world championship tour event in Puerto Rico with illness over the weekend, and then flew out of the island.

The American died during a stopover, believed to be in Dallas, Texas, on his way back home to Kauai, Hawaii where he was to seek treatment.

It is believed Irons was battling a severe case of dengue fever, a debilitating viral disease.

Phil Irons, the father of the 32-year-old surfer, confirmed his son's death Tuesday. The cause of death was not immediately known but Irons was reportedly suffering from dengue fever.

The younger Irons was found dead in a hotel room in Dallas, where he was on a layover en route to his home on Kauai. He was returning from Puerto Rico, where he was to have competed in the 2010 Rip Curl Pro Search.

Irons died on November 2, 2010; according to The Association of Surfing Professionals, "he had reportedly been battling with dengue fever, a viral disease." It is believed that this may be linked to his death. Professor Robert Booy, an infectious disease academic, however, was suspicious of this, saying that dengue fever deaths are rare. Investigators have ruled out foul play as a cause but are currently waiting on toxicology reports. He was found lying in bed on his back with the sheets pulled up to his chin, by two hotel staff after he had failed to respond to knock on the door and they went in to investigate.

In response to Irons's death, a World Championship Tour event in Puerto Rico was postponed for two days with competitors holding a "paddle out" memorial service for Irons. Irons had withdrawn from the event citing ill health and was flying back to his home in Hawaii before dying during a stopover in Dallas, Texas. He had reportedly stopped in Miami after leaving Puerto Rico and early reports said he was put on a saline drip. Later reports suggest he went to South Beach to party. He was reported to have been vomiting on the Hawaii bound plane before being removed prior to take-off.In the days immediately following his death it was reported that, in Dallas, an extremely ill Irons had attempted to board his connecting flight to Honolulu at 11:30 a.m. but was turned away at an American Airlines gate—a claim the company denies.

Local officials said the cause of death was not immediately known but Hawaii's Star Advertiser reported that his death was being investigated as a possible overdose of methadone, citing information provided by the Tarrant County Medical Examiner's Office. Irons was diagnosed at one point with sleep apnea. A toxicologist said combining methadone with that condition could be risky. According to the official police report Alprazolam and Zolpidem were found in Irons' hotel room. Despite many rumors that methadone was also found in his room, the official police report does not confirm that theory.

A memorial service was held November 14th in Hanalei Bay, Kauai. His wife Lyndie and brother Bruce, scattered his ashes outside Hanalei Bay where thousands of family, friends and admirers said their last goodbyes.

Rival surfer and friend Kelly Slater dedicated his November 6, 2010 victory to Irons. "I just want to send my condolences to Andy's family," Slater said. "I'm a little overwhelmed right now but I want to dedicate this to Andy... It's like exact opposites. This doesn't really offset that, I'd give this title away in a second if Andy could come back." 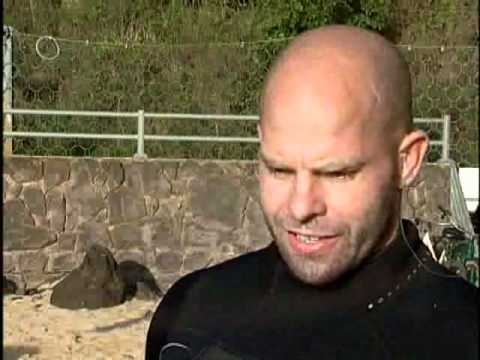