Pat Burns, who enjoyed instant success wherever he coached and who capped his tumultuous career by guiding the New Jersey Devils to Stanley Cup glory in 2003, has died of cancer.

The former NHL coach battled cancer of the colon and the liver in 2004 and 2005 and hoped he had beaten the disease, but in January 2009 doctors found it had spread to his lungs.

The third time, he initially opted to forgo any further treatment, but then decided to go with chemotherapy to try to extend his life as long as possible.

It was reported on September 16, 2010, that Burns' health had suddenly deteriorated and that he had returned to his home in Magog, Quebec, to be with his family. Reports surfaced the following day that Burns had died that morning, but Burns' son denied news reports that his father had passed away. That same day, an online report by the Toronto Sun also incorrectly reported Burns' death, but was quickly revealed to be erroneous. Burns himself talked to both English and French media about the incident, denying that he had died and asked for the situation to be rectified immediately.

He died on November 19, 2010, in Sherbrooke, Quebec, at the Maison Aube-Lumière, due to colon cancer which eventually spread to his lungs.

Pat Burns had barely been laid to rest when thieves smashed a window on his family's SUV and stole prized belongings including cherished photographs, autographed sweaters signed by each of 30 NHL teams which were meant to be auctioned for charity. Thieves did not spare even the late coach's credit cards. A grieving family is pleading for their return.

Pat Burns, one of the most successful NHL coaches of the past 20 years, died Friday after a lengthy battle with cancer.

Burns, 58, died while surrounded by his family at La Maison Aube-Lumière in Sherbrooke, Que.

During his 14-year NHL coaching career, Burns posted a 501-353-151-14 record in 1,019 games behind the bench of the Montreal Canadiens, Toronto Maple Leafs, Boston Bruins and New Jersey Devils.

Burns won the Stanley Cup with the Devils in 2003, and is the only person in league history to win three Jack Adams Trophies, awarded to the NHL's coach of the year. 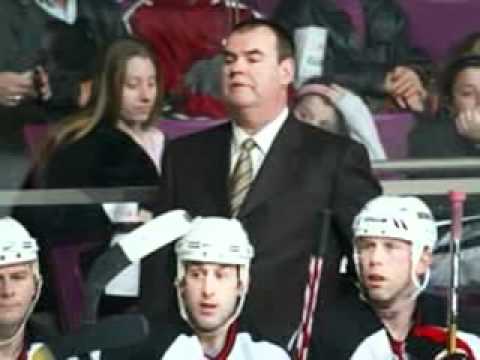