Scientists have captured antimatter atoms for the first time, a breakthrough that could eventually help us to understand the nature and origins of the universe.

Researchers at CERN, the Geneva-based particle physics laboratory, have managed to confine single antihydrogen atoms in a magnetic trap.

This will allow them to conduct a more detailed study of antihydrogen, which will in turn allow scientists to compare matter and antimatter.

Understanding antimatter is one of the biggest challenges facing science -- most theoretical physicists and cosmologists believe that at the Big Bang, when the universe was created, matter and antimatter were produced in equal amounts.

The ALPHA experiment at CERN1 has taken an important step forward in developing techniques to understand one of the Universe’s open questions: is there a difference between matter and antimatter? In a paper published in Nature today, the collaboration shows that it has successfully produced and trapped atoms of antihydrogen. This development opens the path to new ways of making detailed measurements of antihydrogen, which will in turn allow scientists to compare matter and antimatter.

For physicists, a bit of antimatter is a precious gift indeed. By comparing matter to its counterpart, they can test fundamental symmetries that lie at the heart of the standard model of particle physics, and look for hints of new physics beyond. Yet few gifts are as tricky to wrap. Bring a particle of antimatter into contact with its matter counterpart and the two annihilate in a flash of energy.

Now a research collaboration at CERN, Europe's particle-physics lab near Geneva, Switzerland, has managed, 38 times, to confine single antihydrogen atoms in a magnetic trap for more than 170 milliseconds. The group reported the result in Nature online on 17 November. "We're ecstatic. This is five years of hard work," says Jeffrey Hangst, spokesman for the ALPHA collaboration at CERN. 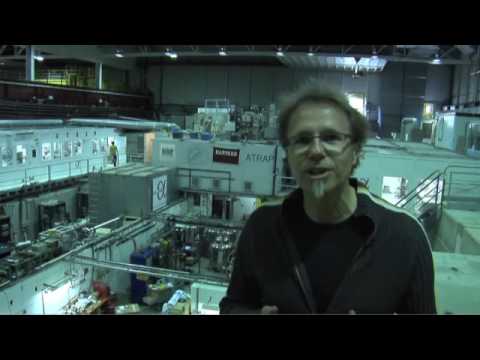