William, second in line to the throne, will marry in London next spring or summer and live in north Wales, where he is serving with the RAF.

"We are both very, very happy," the prince said. He had proposed on holiday in Kenya in October, giving his fiancee his mother's engagement ring.

The Prince of Wales is delighted to announce the engagement of Prince William to Miss Catherine Middleton.

The wedding will take place in the Spring or Summer of 2011, in London. Further details about the wedding day will be announced in due course.

The Prince of Wales said he was 'thrilled' by the engagement of his son Prince William to Kate Middleton, and then quipped: 'They have been practising long enough.'

Speaking at his Poundbury model village in Dorset, the Prince, when congratulated by a member of the public, said: 'It makes me feel very old. Thank you very much.'

The Duchess of Cornwall added that news of Prince William's engagement was 'absolutely wonderful'.

To the relief of the British public and taffeta-craving masses elsewhere, Prince William announced Tuesday that he was officially engaged.

He proposed to his longtime girlfriend, Kate Middleton, while on vacation in Kenya a few weeks ago, according to a statement issued by palace officials. A wedding is planned for the spring or summer of 2011. Other details were meted out, most notably that the engagement ring presented to Middleton, a brilliant oval sapphire surrounded with smaller diamonds, had once belonged to William's late mother. "It was my way of keeping her close to it all," William said of his mother's memory, in the couple's first, much-anticipated and much-deconstructed, television interview on BBC.

Prince William and Kate Middleton met the press on Tuesday at St. James Palace in London, making their first public appearance after announcing their engagement.

"Blimey," said William as he faced a torrent of camera flashes Tuesday at St. James's Palace. He wore a navy suit, while Middleton donned a simple blue dress.

Middleton acknowledged that being queen was "a daunting prospect."

"Hopefully I'll take it in my stride," she said.

Middleton described the proposal this way: "It was very romantic, and it was very personal." She declined to say whether the prince had gone down on bended knee when he proposed. 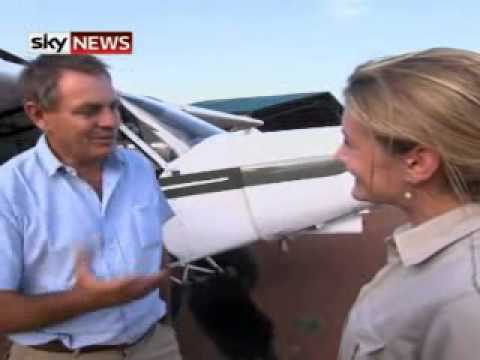