Mario Vargas Llosa Is Awarded The Nobel Prize For Literature

The Peruvian writer Mario Vargas Llosa, whose deeply political work vividly examines the perils of power and corruption in Latin America, won the 2010 Nobel Prize in Literature on Thursday.

Announcing the award in Stockholm, the Swedish Academy praised Mr. Vargas Llosa “for his cartography of the structures of power and his trenchant images of the individual’s resistance, revolt and defeat.”

Peruvian Mario Vargas Llosa won the 2010 Nobel Prize in literature on Thursday as the academy honored one of the Spanish-speaking world's most acclaimed authors and an outspoken political activist who once ran for president in his tumultuous homeland.

Vargas Llosa, 74, has written more than 30 novels, plays and essays, including "Conversation in the Cathedral" and "The Green House." In 1995, he won the Cervantes Prize, the most distinguished literary honor in Spanish.

Mario Vargas Llosa, the Peruvian novelist, poet, essayist and journalist, was awarded the 2010 Nobel Prize in Literature, the Swedish Academy announced today. The academy honored him "for his cartography of structures of power and his trenchant images of the individual's resistance, revolt and defeat." He is the first Latin American writer to win the prize since Octavio Paz in 1990.

The Swedish Academy hailed "his cartography of structures of power" and "trenchant images of the individual's resistance, revolt, and defeat."

The 74-year-old has written more than 30 novels, plays and essays.

He is the first South American winner of the prize since 1982 when it went to Colombian Gabriel Garcia Marquez.

In the previous six years, the academy awarded the 10 million kronor (£938,000) prize to five Europeans and one Turk, sparking criticism that it was too Euro-centric. 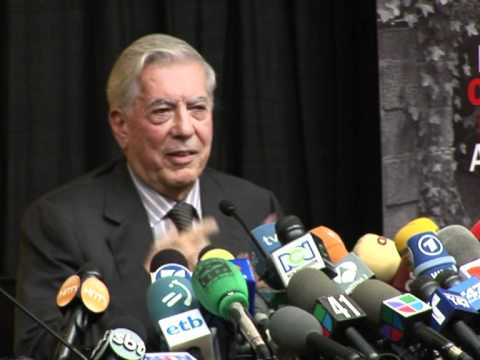