Howard Zinn, the Boston University historian and political activist who was an early opponent of US involvement in Vietnam and whose books, such as "A People's History of the United States," inspired young and old to rethink the way textbooks present the American experience, died today in Santa Monica, Calif, where he was traveling. He was 87.

His daughter, Myla Kabat-Zinn of Lexington, said he suffered a heart attack.

Howard Zinn (August 24, 1922 – January 27, 2010) was an American historian, author, left-wing activist, playwright, intellectual and Professor of Political Science at Boston University from 1964 to 1988. He wrote more than 20 books, which included his best-selling and influential A People's History of the United States. Zinn wrote extensively about the civil rights, civil liberties and anti-war movements. His memoir, You Can't Be Neutral on a Moving Train, was also the title of a 2004 documentary about Zinn's life and work.

Zinn was swimming in a hotel pool when he died of an apparent heart attack in Santa Monica, California on January 27, 2010. He had been scheduled to speak at the Santa Monica Museum of Art for an event titled "A Collection of Ideas... the People Speak."

He said he wanted to be known as "somebody who gave people a feeling of hope and power that they didn't have before."

Howard Zinn, historian and shipyard worker, civil rights activist and World War II bombardier, and author of “A People’s History of the United States,” a best seller that inspired a generation of high school and college students to rethink American history, died Wednesday in Santa Monica, Calif. He was 87 and lived in Auburndale, Mass.

The cause was a heart attack he had while swimming, his family said. 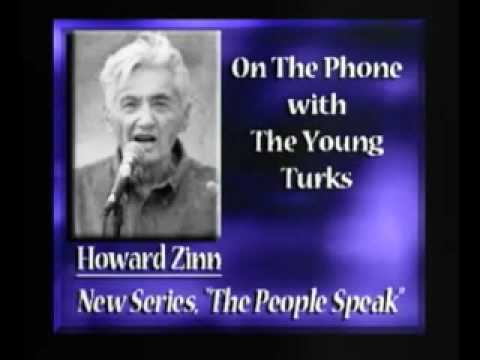