James Cameron’s science-fiction epic “Avatar” has passed his “Titanic” to become history’s highest-grossing film, with a sizable boost from higher-priced tickets for 3-D and Imax showings.

“Avatar,” like other contemporary films, has also benefited from the steady inflation of ticket prices —today’s average is $7.46, up from $4.69 in 1998 when “Titanic” was in theaters — meaning that “Titanic” had to sell many more tickets to reach box-office totals like “Avatar’s.” But “Avatar” remains poised to keep going for weeks if not months.

Through Monday its ticket sales around the world reached $1.86 billion, edging past the $1.84 billion in sales posted by “Titanic,” which came out in December 1997, according to figures released Tuesday by 20th Century Fox.

Including the revenue from a re-release of Avatar featuring extended footage, Avatar has grossed over $760 million in the U.S. and Canada, and $2.016 billion in other territories for a worldwide total of over $2.777 billion, with over 72.6% of its total worldwide gross in international markets. Avatar has set a number of box office records during its release: on January 25, 2010, it surpassed Titanic's worldwide gross to become the highest-grossing film of all time worldwide 41 days after its international release, just two days after taking the foreign box office record, and on February 2, 47 days after its domestic release, Avatar overtook Titanic to become the highest-grossing film of all time in Canada and the United States. It became the highest-grossing film of all time in at least 30 other countries and is the first film to earn over $2 billion in foreign box office receipts. IMAX ticket sales account for $228 million of its worldwide gross, more than double the previous record. 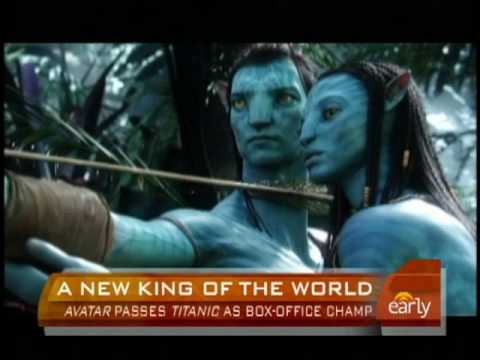