Former Illinois governor Rod Blagojevich apologized this morning for saying in an Esquire Magazine interview that he was "blacker than Barack Obama."

Blagojevich, in front of his home in Chicago, told reporters it was a poor way of expressing what he wanted to say.

In the interview hitting stands this week Blagojevich made this statement:

"I'm blacker than Barack Obama. I shine shoes. I grew up in a five-room

apartment. My father had a little laundromat in the black community not far

from where we lived. I saw it all growing up."

Using the word "stupid" dozens of times in an ad hoc five-minute press conference, the former Illinois governor called his comments a "metaphor," but defended the spirit behind them. He claimed that his comments were expressing a frustration with Barack Obama's policies, bailing out the banks but leaving everyday people behind. 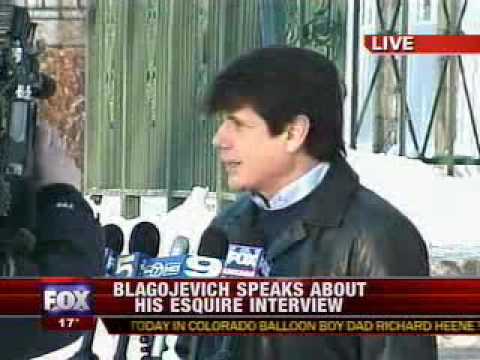