At least 88 people have been killed by a suicide bomb attack at a volleyball court in the troubled north-west of Pakistan, local police say.

Police chief Ayub Khan said the bomber drove towards a field where people were watching a match, before detonating a load of high-intensity explosives.

The attack happened near Lakki Marwat, close to North and South Waziristan.

Taliban militants underscored their determination on Friday to prevent Pakistani citizens from forming armed militias to keep them at bay, as a suicide bomber rammed a truck loaded with hundreds of pounds of explosives into families and children crowded on a playground in the northwest.

Local authorities said they had little doubt that the village, Shah Hassan Khel, was chosen because residents were forming a pro-government militia. The village sits at the edge of the tribal area of South Waziristan, where the military opened an offensive to break up Taliban strongholds in October.

Reporting from New Delhi and Peshawar, Pakistan — At least 75 civilians were killed and dozens were wounded Friday when a suicide bomber detonated an explosives-laden vehicle at an outdoor volleyball game in northwestern Pakistan, police said. The attack apparently was aimed at members of an anti-Taliban "peace committee" that has been challenging the influence of insurgents, officials and town elders said.

At least 88 people have been killed and dozens more wounded in a suicide bomb attack at a volleyball match in north-west Pakistan, according to police.

According to the latest reports from police, a further 37 people have been wounded in what is deadliest attack in more than two months.

It is the latest bloodshed to rattle Pakistan since the army launched an offensive against Taliban fighters in South Waziristan.

The operation has scattered insurgents but provoked apparent reprisal attacks that have killed more than 500 people since October.

The death toll climbed to 99 on Sunday after a suicide car bomb exploded Friday in the middle of a group of men playing volleyball in northwest Pakistan, police said.

Thirty-six others who were injured in the attack remained hospitalized Sunday, said Mohammed Ayub Khan, police chief of the Lakki Marwat district. Those killed included at least six children, and most of the other victims were teenagers who were watching the volleyball game, he added. People who lived near the volleyball court also were among the casualties. 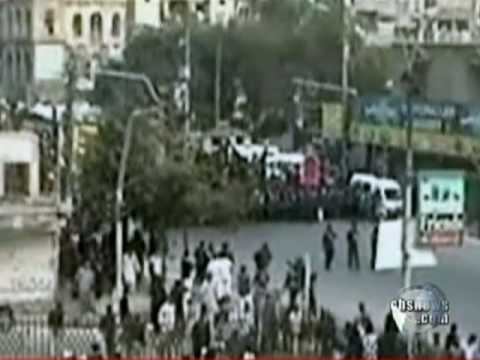