As former Illinois governor Rod Blagojevich (D) sees it while awaiting trial on corruption charges, "the story's upside down." Far from brazenly peddling influence while in office, he swears he was "an honest, hardworking governor for the people."

"Every allegation's a lie," Blagojevich said in a telephone interview Tuesday from New York, where he is promoting his new book, "The Governor." "What ever happened to the presumption of innocence?"

Federal prosecutors, reinforced by testimony from former Blagojevich insiders and hours of secretly recorded FBI audiotapes, intend to prove next year that the two-term governor shook down businessmen and pressured enemies in a "public corruption crime spree."

Rod Blagojevich is cracking jokes as he prepares to go on national television to plug his new book and once again defend himself against the widespread corruption charges that led to his political ruin.

Everything about this nine-month stretch leading up to his criminal trial should be terrifying and sobering. But the former Illinois governor seems in a playful mood on the set of CBS' "The Early Show." 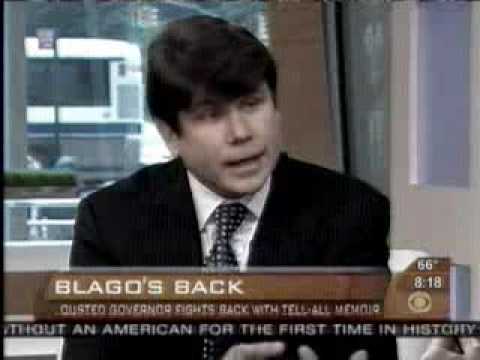