Mark Kirk's record on immigration reform is not sterling.

It's also a topic he'd prefer to avoid. But if the North Shore Republican wants to run for U.S. Senate, the group Illinois Immigrant Action (the Illinois Coalition for Immigrant and Refugee Rights' 501(c)(4) sister organization) isn't going to let him dodge the issue.

At a press conference in Chicago this morning, IIA representatives and several Latino elected officials unveiled a $5,000 Spanish language ad-buy targeting Kirk. The spots mark the culmination of a two-week organizing blitz and will run in seven Spanish-language newspapers and on three radio stations. They mock the Republican Senate candidate for his remarks on the House floor two years ago in which he explained his support for international family planning by suggesting that it would result in a slowing of Mexico's population growth rate (which actually had plummeted since 1980) and thereby "reduce the long-term illegal immigration pressure on America's borders." Organizers say immigrants and their allies deserve a sincere apology.

A two-year-old comment from U.S. Rep. Mark Kirk suggesting that condoms could help reduce the illegal immigration of Mexicans to America is again an issue as the North Shore Republican campaigns for President Obama's former Senate seat. 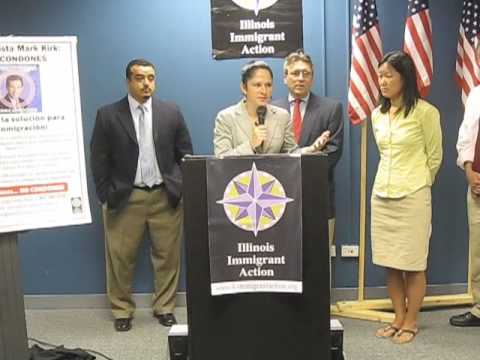