Annett Wolf said that the US actor, who had been battling pancreatic cancer for nearly two years, died with family at his side on Monday.

The actor had been starring in US TV show The Beast since being diagnosed with the disease. He had also planned to write a memoir with his wife.

Patrick Swayze, whose good looks and sympathetic performances in films such as "Dirty Dancing" and "Ghost" made him a romantic idol to millions, died Monday. He was 57.

Swayze's doctor, Dr. George Fisher, revealed in early March 2008 that Swayze was suffering from the disease.

"Patrick Swayze passed away peacefully today with family at his side after facing the challenges of his illness for the last 20 months," Wolf said in a statement Monday.

In an interview with Barbara Walters which aired in January 2009, Swayze admitted that he had a "tiny little mass" in his liver. On January 9, 2009, Swayze was hospitalized with pneumonia. The pneumonia was said to be a complication of chemotherapy treatments for Swayze's cancer. On January 16, he was released from the hospital to rest at home with his wife. On April 19, 2009, doctors informed Swayze that the cancer had again metastasized to his liver. Swayze stated that his chain smoking probably "had something to do with" the development of his disease. Photos taken of a gaunt Swayze in the months before his death showed him continuing to smoke.

Swayze died "with family at his side" on September 14, 2009, at age 57, 20 months after being diagnosed. Swayze's publicist, Annett Wolf, confirmed to CNN that he had died of pancreatic cancer. He was cremated and his ashes scattered over his New Mexico ranch. 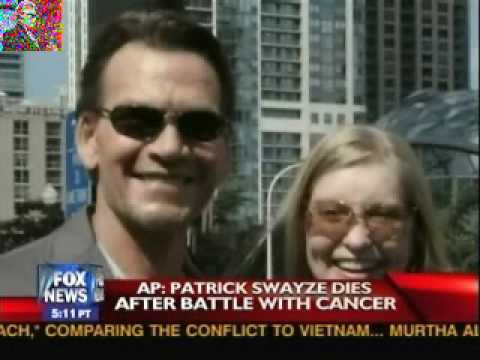