OBAMA WE HAVE WAKEN UP [sic] TO YOUR EVIL PLANS”

Thousands of conservative protesters from across the country converged on the Capitol Saturday morning to demonstrate against President Obama's proposed health care agenda and voicing opposition to big government, what they say is over-the-top spending.

Carrying signs depicting President Obama as Adolf Hitler and the Joker, and chanting slogans such as "'No big government" and "Obamacare makes me sick," approximately 60,000 to 70,000 people flooded Pennsylvania Ave, according to the Washington DC Fire Department.

On the final stop of the Tea Party Express, activists marched to the U.S. Capitol on Saturday to protest health care reform, higher taxes and what they see as out-of-control government spending.
iReporter Justin Hall attended Saturday's rally. "We think things can get a lot worse before they get better," he said.

The conservative advocacy group began its tour in Sacramento, California, and made its way across the country, hosting rallies in about 30 cities. Washington is the final destination. 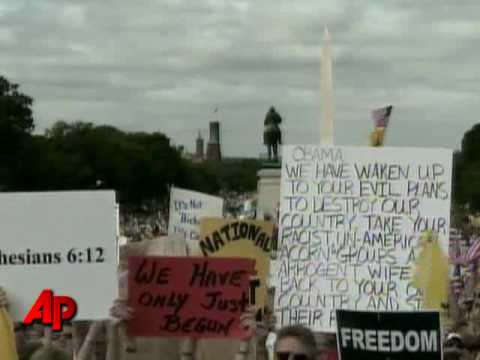