A deadly mid-air collision between a tourist helicopter and a small plane over New York’s Hudson River has revived fears about the safety of sight-seeing flights in America.

Nine people, including five Italian tourists, died when the helicopter was hit from behind by a single-engine Piper aircraft on Saturday.

A small private plane carrying three people and a New York tourist helicopter with six collided in midair and plunged into the Hudson River off Hoboken, N.J., opposite Manhattan’s West Side, just before noon on Saturday. All on board the two aircraft were killed, the authorities said.

The cause of the accident was under investigation. But what perhaps thousands of people out on a crystalline summer day saw from both sides of the Hudson was a stunning, low-altitude accident in which the plane rolled up and into the helicopter, striking with a crack like thunder as the helicopter’s blades and one of the plane’s wings flew off, and then both aircraft fell and vanished into the river.

He was a witness to horror and he's seen it coming for years.

A close colleague of the pilot of the doomed tourist helicopter says it can be dicey in the skies over the Hudson River - and Saturday's disaster that killed nine was "inevitable."

"We were borderline surprised that it took so long for a crash like this to happen," saidBen Lane, 34, who frantically radioed his pilot pal Jeremy Clarke that a plane was bearing down on him.

You would think the last thing anyone would want to do Sunday is take a helicopter ride. I know I sure didn't.

But there I was on Pier 6 on the East River in lower Manhattan, boarding a four-seat tourist chopper with a French family undeterred by Saturday's Hudson Horror. 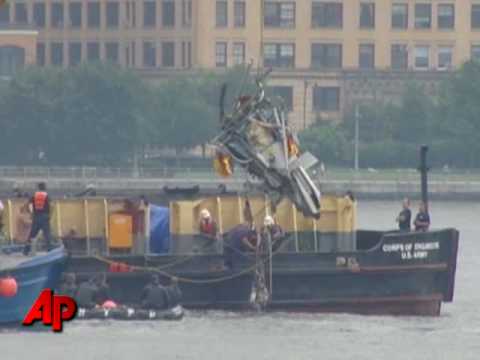