At a street party on a muggy Chicago night, Illinois' former Gov.

Rod Blagojevich jumps on stage with a look-a-like of the once-upon-a-time male hunk Fabio, announcing that they're both out of work.

Blago takes over the mic, swivels his hips, and pays homage to his idol, Elvis, singing "Treat me Nice." At one point he unbuttons his shirt and flips up his collar.
All of this happens before a jumpy audience that both cheers and heckles him.
One person screams: "It's a f-ing valuable thing!" a reference to secret FBI wiretaps where Blagojevich, as governor, is alleged captured talking about selling President Obama's former Senate seat.

A federal judge wouldn't let him appear on I'm A Celebrity...Get Me Out Of Here, but that's not stopping former Illinois Governor Rod Blagojevich from trying to launch a post-political show business career.

He surprised several hundred Chicago residents Friday night at a promotional party thrown by a sound company -- taking the stage and bursting into an Elvis Presley song!

Former Illinois Gov. Rod Blagojevich made an appearance tonight at an annual street party thrown by a video production company. All told, according to people in the crowd of about 200, Blagojevich stayed at the gathering for about 20 to 30 minutes, shaking hands, joking around and having his picture taken with surprised revelers.

Then there was the song.

Reports from the audience differed as to which Elvis Presley tune the former governor performed.

"Don't Be Cruel," said one partygoer.

"Treat Me Right," said another.

According to Blagojevich's publicist, Glenn Selig, the song was, in fact, "Treat Me Nice." 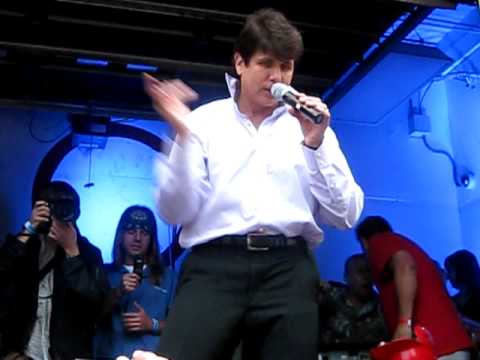 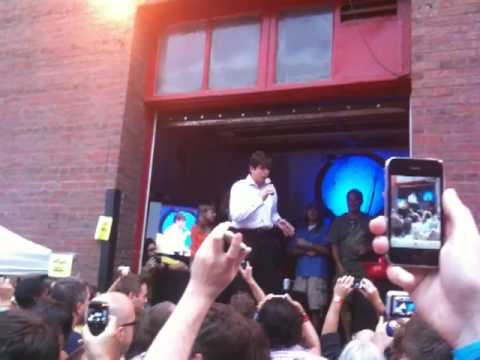