Sonia Sotomayor is Confirmed by the US Senate, Becoming the First Hispanic Supreme Court Justice

On August 6, 2009, Sotomayor's appointment was brought up for a vote on the floor of the Senate.

She was confirmed by a vote of 68 to 31. All Democrats and the two independents who caucus with the Democrats voted in favor of confirmation, with the exception of the ailing Sen. Edward Kennedy, who was unavailable to vote. 31 Republicans opposed the nomination, and nine supported it.

WASHINGTON (CNN) -- Judge Sonia Sotomayor, who rose from the housing projects of the Bronx to the top of the legal profession, made history Thursday when the Senate confirmed her to become the nation's first Hispanic Supreme Court justice.

Sotomayor was easily confirmed in a 68-31 vote. Nine Republicans joined a unanimous Democratic caucus in supporting her nomination.

Sen. Ted Kennedy, D-Massachusetts, supported Sotomayor but was not present for the vote because of illness.

Sotomayor, a 55-year-old federal appeals court judge, will be the 111th person to sit on the high court and the third female justice.

She will be sworn in at the Supreme Court by Chief Justice John Roberts on Saturday. Sotomayor was confirmed after senators spent a final day of debate rehashing the main arguments for and against her. 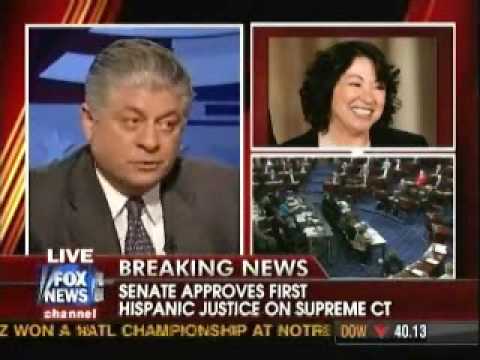