TEHRAN, Iran (CNN) -- Iranian pro-government Basij militia members dispersed crowds of protesters in Tehran Thursday -- sometimes with force -- according to a journalist on the scene.

The demonstration is taking place on the 10th anniversary of a student uprising that, at the time, posed the biggest threat to the Islamic regime since its inception in 1979.

The protesters are using the anniversary to resume demonstrations against the outcome of the June 12 presidential election.

An estimated 2,000 to 3,000 people crowded the streets and headed toward Tehran University, the site of the 1999 student uprising.

Several protesters were hit on the arms and backs by the Basij, the journalist reported. The militia tried to persuade one man, whose face was bleeding, to get into an ambulance, but he refused.

Some of the protesters shouted "Allah u Akbar," or "God is Great" and "Ya Hussein, Mir Hussein" referring to opposition candidate Mir Hossein Moussavi. 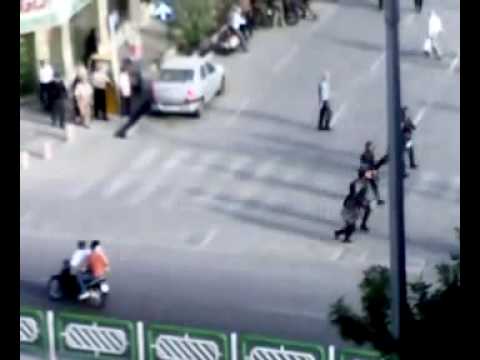