In about an hour, the Senate Judiciary Committee will begin the confirmation hearing of Judge Sonia Sotomayor, President Obama’s first nominee to the Supreme Court.

Sotomayor has said that as a child she was captivated by Nancy Drew and "Perry Mason," and the drama that is expected to play out most of this week will feature its own large cast of characters. Two of the protagonists: Committee Chairman Patrick Leahy, a Vermont Democrat who will try to safeguard the nominee, and Jeff Sessions, an Alabama Republican who will lead the GOP attack on her nomination.

The chairman of the Senate Judiciary Committee says Sonia Sotomayor will be a Supreme Court justice who's "committed to the law" and "not to ideology."

Describing Sotomayor as an "outstanding" nominee at the start of her Senate confirmation hearing Monday, Sen. Patrick Leahy denounced what he described as efforts to distort Sotomayor's record and views. 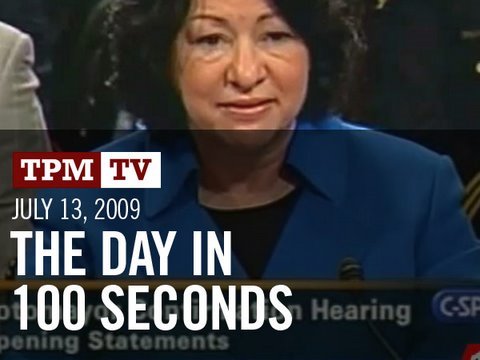