Last week marked the 20th anniversary of the Tiananmen Square demonstrations, which culminated with the Beijing massacre, in which hundreds, possibly thousands, of people were killed.

In Hong Kong, the annual candlelight vigil in Victoria Park was attended by some 150,000 people, who listened to excerpts from the late party leader Zhao Ziyang's memoirs, a taped message from Ding Zilin, leader of the group known as Tiananmen Mothers, all of whom lost children on June 4, 1989, as well as the speech of a former student leader, Xiong Yan, now a U.S. army chaplain.

In mainland China, however, there was no public commemoration of the occasion. Indeed, heavy security forces were deployed to ensure that there would be no speeches and no demonstrations. Dissidents and activists were rounded up, sent away from the capital, or put under house arrest.

Twenty years after the massacre of pro-democracy activists, Chinese authorities flooded Tiananmen Square with security forces this week to ensure that there were no protests and no commemorations. Visitors were searched at checkpoints, foreign television crews were turned away and certain Internet sites were also blocked.

Despite the country’s stunning economic growth over the past two decades, Beijing’s autocrats are clearly still afraid of their own people. In the months before the anniversary, they intensified a crackdown on human rights activists, including mothers of Tiananmen Square victims. 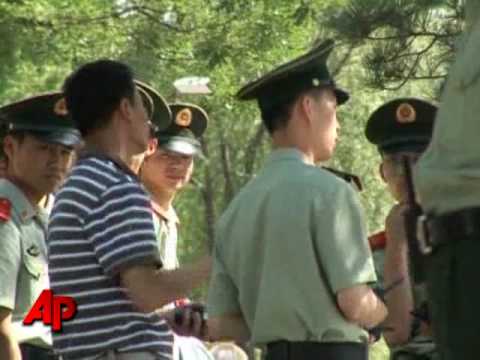