The victory sends the Americans to the Confederations Cup final, and snaps Spain's 15-game winning streak. Spain hadn't been beaten since a loss to Romania in November 2006.

The United States is ranked 14th and was nearly eliminated after losing its first two games in the eight-nation Confederations Cup, a World Cup warmup.

The Americans will play defending champion Brazil or host South Africa in its first men's final at a FIFA competition.

Spain, the European champion, had set an international record with 15 straight victories and was trying to stretch its unbeaten streak to 36, breaking the mark set by Brazil from December 1993 to January 1996.

But American goalkeeper Tim Howard came up with several big saves and Altidore got the first goal when he outmuscled Joan Capdevila, his teammate on Spain's Villarreal to beat goalkeeper Iker Casillas. Dempsey scored when he pounced on Landon Donovan's cross, which bounced off the foot of Sergio Ramos.

The U.S. had been 1-7-1 against top-ranked teams, beating Brazil in the 1998 CONCACAF Gold Cup and tying Argentina last summer in an exhibition at Giants Stadium. When the United States upset Brazil, goalkeeper Kasey Keller had an outstanding game, just as Howard did.

The United States scored goals by Jozy Altidore in the 27th minute and Clint Dempsey in the 74th minute, defeating a top-ranked team for the first time since a 1-0 victory over Brazil at the 1998 Gold Cup. The United States is now 2-7-1 against the world’s No. 1 teams.

The victory halted Spain’s 35-game unbeaten streak, handing the Spanish their first defeat since November 2006. The Americans now advance to the final Sunday to face the winner of Thursday’s semifinal between South Africa and Brazil, the five-time World Cup winner. Brazil defeated the Americans, 3-0, in their earlier meeting in this tournament.

In the final, though, the United States will be without midfielder Michael Bradley, who received a red card for a harsh tackle in the 87th minute, the third such ejection for the Americans in this tournament. It was the only careless blemish on an otherwise nearly perfect evening. 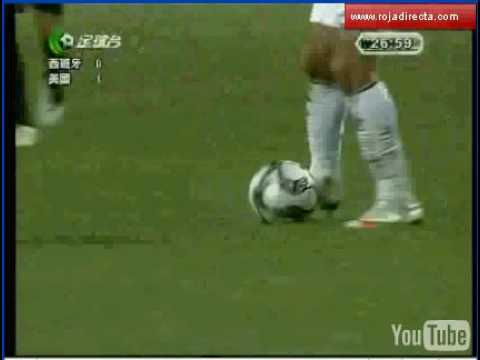