Chaos broke out all around Lucas Glover in Monday’s final round of the United States Open with Bethpage Black finally creating its usual misery and a raucous crowd rooting loudly for inspirational charges by Phil Mickelson and David Duval.

But for a man who had never sniffed this kind of success in a major, Glover handled it with stunning calm.

Glover shook off four bogeys, never letting his stumbles crack his concentration, and saved the only birdie of his round for the best possible time: a 7-foot putt on No. 16 that put him free of the field. His final-round 73 gave him a two-shot victory and sent Mickelson to his fifth runner-up finish in the Open, a skein of misery that seemed on the verge of ending when Mickelson rocked the course with an eagle to tie for the lead on No. 13. And it kept Duval from a breakthrough victory after eight years of career collapse that had dropped him off the golf map. Ricky Barnes, the third-round leader, shot 76 and finished in the three-way tie for second.

I’d be lying if I said I wasn’t nervous. I had the knees knocking pretty good there on 16, 17 and 18. But I held together and pulled it off.” 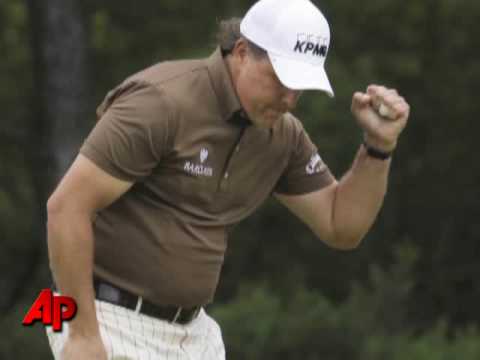