Protests were organized outside the United Nations in New York City; in front of the Iranian embassies in Paris, Berlin, London, and Iranian consulate in Sydney; and in a public square in Toronto.

Protests also occurred in Kuala Lumpur, Los Angeles, San Diego, San Francisco and Dubai. Other protests had been organized in front of the Iranian embassies in Turkey, Paris, Berlin, London, Rome, Vienna, and The Hague. In addition, a large counter-demonstration celebrating the reelection of Ahmadinejad took place in central Tehran

Around 200 people demonstrated outside the Iranian embassy in London on Sunday against President Mahmoud Ahmadinejad's re-election.

"There are around about 200 people," a spokesman for London's Metropolitan Police told AFP, adding that the demonstrations had so far been peaceful and no one had been arrested. 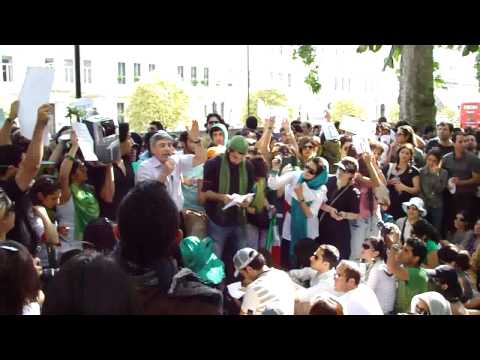