Barack Obama Nominates Sonia Sotomayor to the US Supreme Court

President Obama on Tuesday introduces Judge Sonia Sotomayor as his choice for the U.S. Supreme Court.

If confirmed, Sotomayor, 54, would be the first Hispanic U.S. Supreme Court justice and the third woman to serve on the high court.

Sotomayor "is an inspiring woman who I believe will make a great justice," Obama said at a White House announcement.

She "has worked at almost every level of our judicial system, providing her with a depth of experience and a breadth of perspective that will be invaluable as a Supreme Court justice," he added.

10:13 A.M. EDT
THE PRESIDENT: Thank you. Well, I'm excited, too. (Laughter.)
Of the many responsibilities granted to a President by our Constitution, few are more serious or more consequential than selecting a Supreme Court justice. The members of our highest court are granted life tenure, often serving long after the Presidents who appointed them. And they are charged with the vital task of applying principles put to paper more than 20 [sic] centuries ago to some of the most difficult questions of our time.
So I don't take this decision lightly. I've made it only after deep reflection and careful deliberation. While there are many qualities that I admire in judges across the spectrum of judicial philosophy, and that I seek in my own nominee, there are few that stand out that I just want to mention.
First and foremost is a rigorous intellect -- a mastery of the law, an ability to hone in on the key issues and provide clear answers to complex legal questions. Second is a recognition of the limits of the judicial role, an understanding that a judge's job is to interpret, not make, law; to approach decisions without any particular ideology or agenda, but rather a commitment to impartial justice; a respect for precedent and a determination to faithfully apply the law to the facts at hand.
These two qualities are essential, I believe, for anyone who would sit on our nation's highest court. And yet, these qualities alone are insufficient. We need something more. For as Supreme Court Justice Oliver Wendell Holmes once said, "The life of the law has not been logic; it has been experience." Experience being tested by obstacles and barriers, by hardship and misfortune; experience insisting, persisting, and ultimately overcoming those barriers. It is experience that can give a person a common touch and a sense of compassion; an understanding of how the world works and how ordinary people live. And that is why it is a necessary ingredient in the kind of justice we need on the Supreme Court.
The process of reviewing and selecting a successor to Justice Souter has been rigorous and comprehensive, not least because of the standard that Justice Souter himself has set with his formidable intellect and fair-mindedness and decency. I've sought the advice of members of Congress on both sides of the aisle, including every member of the Senate Judiciary Committee. My team has reached out to constitutional scholars, advocacy organizations, and bar associations representing an array of interests and opinions. And I want to thank members of my staff and administration who've worked so hard and given so much of their time as part of this effort.
After completing this exhaustive process, I have decided to nominate an inspiring woman who I believe will make a great justice: Judge Sonia Sotomayor of the great state of New York. (Applause.)
Over a distinguished career that spans three decades, Judge Sotomayor has worked at almost every level of our judicial system, providing her with a depth of experience and a breadth of perspective that will be invaluable as a Supreme Court justice.
It's a measure of her qualities and her qualifications that Judge Sotomayor was nominated to the U.S. District Court by a Republican President, George H.W. Bush, and promoted to the Federal Court of Appeals by a Democrat, Bill Clinton. Walking in the door she would bring more experience on the bench, and more varied experience on the bench, than anyone currently serving on the United States Supreme Court had when they were appointed.

On May 26, 2009, President Barack Obama announced his selection of Judge Sonia Sotomayor for Associate Justice of the Supreme Court of the United States, to replace retiring Justice David Souter. Sotomayor's nomination was formally submitted to the United States Senate on June 1, 2009, when the 111th Congress reconvened after its Memorial Day recess. 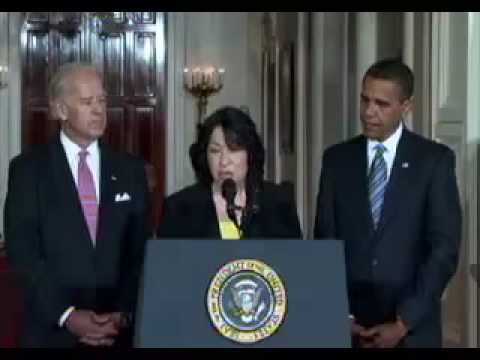