Tests show that eight students at a Queens high school are likely to have contracted the human swine flu virus that has struck Mexico and a small number of other people in the United States, health officials in New York City said yesterday.

New York City officials are urging residents not to panic after 28 students of a local preparatory school tested positive for swine flu. Health officials say the cases in New York appear mild and more easily managed than those that have killed more than 100 people in Mexico.

The World Health Organization reports that of the 40 confirmed cases of swine flu in the United States, more than half have been traced to a private high school in New York City.

Classes were canceled at the St. Francis Preparatory School as classrooms, desks and public areas are thoroughly scrubbed with strong disinfectant. The infected students have exhibited only a mild case of the illness and everyone is expected to recover.

New York City Mayor Michael Bloomberg says in addition to the 28 confirmed cases of swine flu at the school, another 17 students are likely infected, with test results due back this week. He emphasized the cases in Queens have not been nearly as severe as those in Mexico, where 1,600 people have fallen ill and more than 100 have died.

"I want to stress that this remains an isolated incident. There is no reason for anyone outside of the St. Francis community to stay home or to change their daily routine unless they are sick," Bloomberg said. Everyone should go to work and go about their day. And, no one who is planning to visit New York City should think twice."

More than 100 students in New York began complaining of flu-like symptoms late last week. Several students recently returned from a vacation to Mexico, and city health officials say it is likely the illness was spreading person-to-person.

"If you have fever and cough or soar throat, stay home. If you are severely ill, by all means, see your doctor. But for most people, even with this strain of flu in New York City now, it is a mild case of flu easily managed by just staying home," Frieden said.

A student at the school, Frederick Jolin, told local media that he fell ill last week.

"I am feeling much better than yesterday," he said. "I think it is really scary - it is at a point anybody could get it," Jolin said.

Health officials are trying to determine why the cases in Mexico have proven so dangerous, while cases in New York and the U.S. states of California and Texas have been relatively mild. 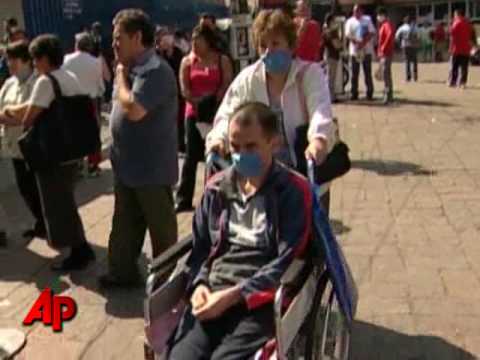