Wakefield (2-1) tossed a five-hitter for his second consecutive complete game in the opener, a 10-1 victory that was called after seven innings because of rain. Kevin Youkilis, Nick Green and Mike Lowell each hit a two-run homer.

Not much is better in baseball than sweeping a day/night doubleheader.

Tim Wakefield was a hero -- again -- in the day game for the Sox. He earned the rain-shortened complete game victory, 10-1. He allowed one run, five hits, one walk and struck out four Twinkies on the day.

Sweep! Seven straight wins -- and tied with the Yankees (9-6) for second place.

Nice win tonight, which I saw from the front row of the Monster Seats. I will post pics soon.

1. The Yanks won in 14 innings on a home run. You know what the headline is on MLB.com? Are you ready to laugh? "Mystique and aura make move to new stadium." Some people are just delusional. If there are any smart Yankee fans, they're more worried about Sabathia giving up seven runs and the fact that they should've won that game long before the 14th, rather than thinking about some magical spirits that allow them to win a game for every two they lose by like 20 runs. 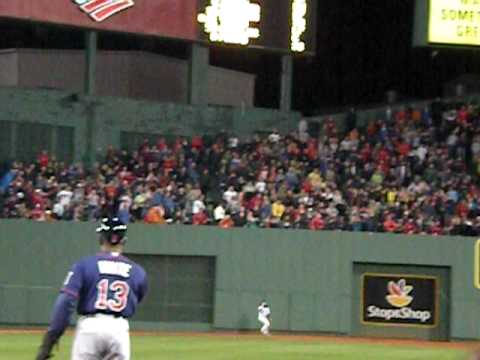