Four Angels were ejected after Bobby Abreu was buzzed by a high-and-tight pitch and the benches cleared, but Abreu made the Red Sox pay when his two-run single in the third inning put the Halos on top for good.

Dustin Moseley picked up his first win as the Angels claimed the series.

From what I saw, Josh Beckett wasn't that bad. But he did get the loss after six innings of work and allowing eight hits, four runs, two walks and striking out five.

The offense was sort of there: Kevin Youkilis, David Ortiz and Nick Green each had two hits. Youkilis and J.D. Drew hit back to back home runs in the second inning.

Ian Browne has a good wrap-up.

Jason Bay says he's surprised at how well he is hitting:

I think I probably doubled my April stats from every other April. I usually stink for whatever reason. Maybe it was the longer Spring Training [this year], but once again, we're only five games in. I wouldn't write my ticket to the April Hall of Fame just yet. It's been nice to get off to a good start. Historically, it hasn't been that good for me.

During the 1st inning of yesterday’s Los Angeles Angels of Anaheim’s 5-4 win over the Boston Red Sox, Josh Beckett buzzed the head of Bobby Abreu after time was called.

Beckett had been holding Chone Figgins on 1st base for a long period of time, probably expecting time to be called. When it wasn’t, Beckett threw the pitch but at the last possible second, time was called and rather than get hurt, Beckett let the pitch go past Abreu’s head. 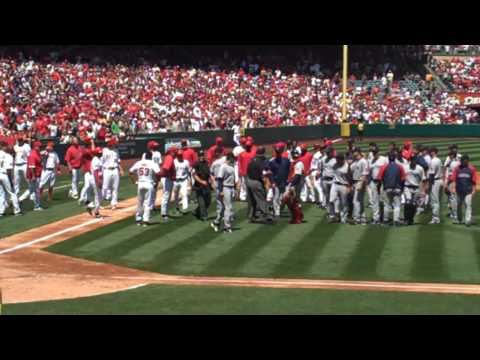