More than 300,000 black-and-gold bedecked Pittsburgh Steelers fans—about the population of the city itself—packed the streets of “Sixburgh” on Tuesday for a parade celebrating the storied franchise’s unprecedented sixth Super Bowl title.

We'll add on to this post as the day unfolds, but reader snowballz - in the true spirit of collaboration and sharing in today's information age - is sending me photos from his iPhone at the rally. What a guy. What a world we live in. And what a killer group of Steelers fans here at BTSC to make this happen impromptu. And finally, what a fun and crowded looking time for all those fortunate enough to be in Pittsburgh.

Source: Behind the Steel Curtain Blog Added by: bob armour

250,000 Plus Celebrate the Steelers Win in Victory Parade

Steeler fans lined up the city of Pittsburgh today, as the team brought back the Lombardi Trophy for an NFL record sixth time with a parade that saw thousands line the streets of the city. Even with snow showers and temps in the 20’s, it didn’t stop the Steeler Nation from being on hand for one heck of a show. 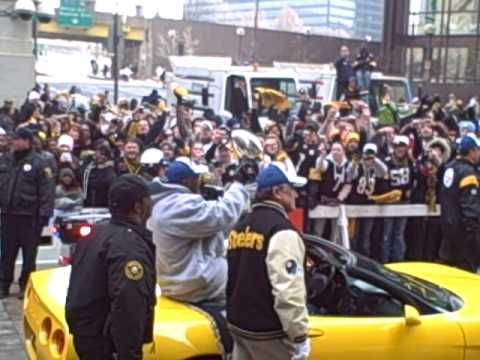